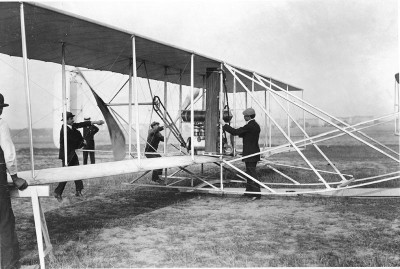 The genesis of the first Wright Flyer can be traced to an experimental biplane kite tested in August 1899.

The Wright Flyers of 1903 and 1905 landed Orville and Wilbur Wright in the record books, but another classic airplane from the Wrights would take them even further. On August 8, 1908, leading European aviation enthusiasts were gathered in the small crowd of about 30 people at the Hunaudieres racetrack in Le Mans, France. After many delays, Wilbur at last took off. He handled his Flyer with such skill that he left his audience breathless.

When he next flew, more than 4,000 people would gather to watch. He had proved to all of Europe that the Wright Brothers had created not just the first airplane in the air but an entirely new technology. All of those who came to scoff at him now cheered -- and many made notes of the clever design of the aircraft. In doing so, they reduced the Wrights' lead in technology, and then, in just a few years, surpassed it.

Wilbur Wright's triumph was complete, but tragedy awaited Orville at Fort Myer. On September 17, 1908, after having given a display of flying equal to Wilbur's in France, Orville was flying over the Fort Myer parade ground, with Lt. Thomas Selfridge at his side as an observer. The aircraft suddenly pitched over and crashed, injuring Orville and killing Selfridge, the first man to die in the crash of a powered airplane.

The Wrights would return to Fort Myer a year later and successfully complete the military trials, selling, at last, an example of their plane to the Army. It, the world's first military aircraft, like the Kitty Hawk Flyer and other classic airplanes, may still be seen in the National Air and Space Museum in Washington.

Orville and Wilbur Wright functioned as a single individual rather than as a team. They were often able to solve problems quickly because their thought processes were so closely attuned. This duality undoubtedly contributed to their amazing success, from the start of their collaborative experiments in flight until their brilliant triumphs in 1908 and in 1909, culminating with the sale of the Military Flyer to the Army.

One of the most amazing things about their first aircraft, the Kitty Hawk Flyer from 1903, is that mod­ern scientists have not been able to duplicate it and fly it successfully. There is some speculation that even with modern help in the form of simulators and extensive training, no modern pilot will be able to fly an exact copy of the classic Wright Flyer, because no modern pilot is an exact copy of the integrated personalities of Wilbur and Orville Wright.