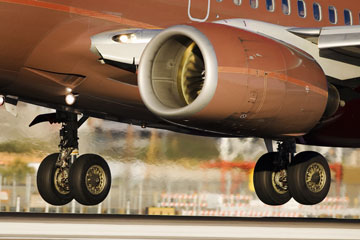 We've discussed the parts of an airplane necessary for flight, but just as a bird eventually needs to stretch its legs, so too does an airplane require some form of landing gear. The gear in turn requires an undercarriage, or a structure that supports the plane's weight on the ground.

The Wright brothers' 1903 flyer depended on simple wooden skids for landing in the sand. Other more modern craft to possess landing skids include the German Messerschmitt ME 163 Komet, a World War II rocket-propelled interceptor, and the U.S. Air Force's X-15, an experimental, high-speed 1960s jet. Along similar lines, some aircraft boast floats or skis for landing on water, snow or ice.

When you think of landing gear, however, you probably think of the wheeled variety. The actual wheels involved have ranged over the vast spectrum of aviation designs. Some early landing gear resembled bicycle wheels while larger aircraft often feature bogie landing gear that employ sets of four or more wheels on each brace. During the 1950s, the U.S. Air Force even experimented with tank-style tracked landing gear for the enormous six-engine Convair B-36 Peacemaker.

Regardless of the type of wheel employed, such landing gear are typically arranged in one of two arrangements. First there's the conventional undercarriage with two front wheels and one smaller tail wheel or skid. You can spot this arrangement, also known as a taildragger undercarriage, on older prop-driven aircraft. Most modern planes use a tricycle undercarriage, in which the smaller wheel is positioned at the front of an aircraft.

Variations on these two basic themes are numerous, with additional wheels added depending on the particular demands of a given aircraft. The Lockheed U-2, for instance, features a tandem design with two fuselage wheels running down the middle and supporting wheels on each wing for balance. Many modern aircraft feature retractable landing gear, which pull up into fuselage during flight, but others still feature fixed landing gear that remain extended all the time.

But what if your plane is prevented from making a conventional landing? That's next.