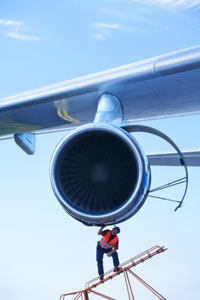 When it comes to propelling an airplane through the sky, different designs depend on different means of propulsion to provide thrust. Most methods, however, work along the same basic principle: An engine accelerates a gas.

Propeller engine: In a typical propulsion system, an engine mixes fuel with air and burns the fuel to release the energy. The resulting heated gas moves a piston, which is attached to a crankshaft. This spins a propeller, or prop, which is essentially an array of spinning wings. Each blade is an airfoil with an angle of attack. The angle is greater toward the center because the speed of the propeller through the air is slower close to the hub. Many larger prop-driven aircraft boast propellers with adjustable pitch mechanisms. These mechanisms let the pilot adjust the propeller's angle of attack depending on air speed and altitude. There are, of course, variations. For example, in turbo prop planes, a gas turbine spins the propeller, and electric aircraft designs don't employ combustion.

Rocket engine: While a propeller engine uses the surrounding air as the working fluid of its propulsion, all a rocket needs is the thrust of its own combustion exhaust gas. This is why a rocket can provide thrust in space, but a propeller cannot. A rocket engine combines fuel and an internal source of oxygen called an oxidizer. The oxygen and fuel ignite in a combustion chamber, exploding in a hot exhaust. These gases pass through a nozzle to produce thrust.

Gas turbine engine: Also known as a jet engine, this means of propulsion works a lot like a rocket engine, only it obtains the necessary air from the surrounding atmosphere rather than a tank. As such, jet engines don't work in space either. Many variants of gas turbine engines, such as those seen on most airliners, collect the necessary air through fanlike rotary compressors. A ramjet, however, doesn't use a compressor. Instead, the airplane builds up speed, which forces air through forward-facing vents in the engine. In this model, the aircraft's speed naturally compresses the air necessary for combustion.

Now that we've covered engines, let's get some serious speed.