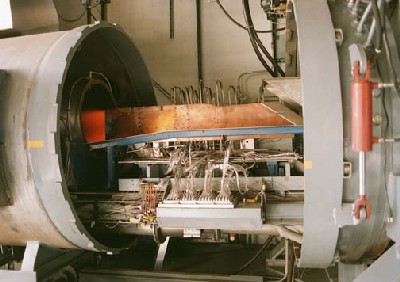 In a conventional rocket engine, a liquid oxidizer and a fuel are pumped into a combustion chamber where they burn to create a high-pressure and high-velocity stream of hot gases. These gases flow through a nozzle that accelerates them further (5,000 to 10,000 mph exit velocities being typical), and then leave the engine. This process provides thrust for the spacecraft.

If you've read the article on How Rocket Engines Work, then you know that the space shuttle needs 143,000 gallons of liquid oxygen, which weighs about 1,359,000 pounds. When empty, the shuttle itself only weighs 165,000 pounds, the external tank weighs 78,100 pounds, and the two solid rocket boosters weigh 185,000 pounds each. That's a total of 613,000 pounds. When you add fuel and oxidizer, the total weight of the vehicle jumps to 4.4 million pounds.

NASA has determined that it can easily drop the weight of a vehicle at launch if they were to take away the liquid oxidizer, which would quickly drop the weight of the vehicle to about 3.1 million pounds. That's still a heavy vehicle, but it would mean a huge reduction in cost of launching a vehicle into orbit.

So, if you remove the liquid oxygen, wouldn't the fuel be unable to combust and provide thrust? You have to think outside the normal operation of a conventional rocket engine. Instead of using liquid oxidizer, an air-breathing rocket, as its name suggests, will take in air from the atmosphere. It will then combine it with the fuel to create combustion and provide thrust.

An air-breathing rocket engine, also called a rocket-based, combined cycle engine, is very similar to a jet engine. In a jet engine, air is sucked in by the compressor. The engine then compresses the air, combines it with a fuel, and burns the product, which expands and provides thrust. A jet engine can only be used for up to Mach 3 or 4 before its parts will begin to overheat. In a supersonic combustion ramjet, or scramjet, an air inlet draws in air. The air is slowed and compressed as the vehicle speeds through the atmosphere. Fuel is added to the supersonic airflow, where the two mix and burn. Fuels most likely to be used with the air-breathing rockets include liquid hydrogen or hydrocarbon fuel.