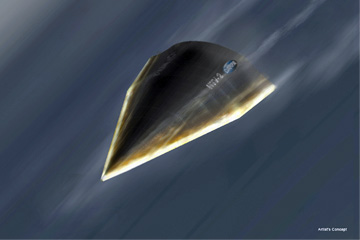 Some flights zip by so quickly that attendants barely have time to break out the drink cart. Others drag on long enough for dinner, a few movies and a full night's sleep. What if you could get the best of both, jaunting from New York to Tokyo in, say, 90 minutes? Would you risk the mother of all jet lag if you could cross the country in less time than it takes to pass through airport security?

Such were the questions on our minds as we read about the second test flight of the Falcon Hypersonic Technology Vehicle (HTV-2), a U.S. Defense Advanced Research Projects Agency (DARPA) aircraft promising flight speeds at or faster than Mach 20, or 20 times the speed of sound.

The Lockheed Martin HTV-2 was not a passenger plane or even a fighter jet, but rather an unmanned, rocket-launched test bed for hypersonic technologies. With the data it provided, the Pentagon plans to develop Prompt Global Strike vehicles -- planes capable of reaching targets worldwide with little or no warning -- ideally, in 60 minutes or less. Think of them as the unmanned, rocket-plane equivalents of cruise missiles, or as very violent Domino's pizza drivers (no refunds for deliveries taking longer than 30 minutes) [sources: DARPA; Weinberger].

Unfortunately, DARPA's HTV-2 second test, like its first, began with loss of contact and ended with a self-destruct ditch into the Pacific Ocean [sources: AFP; Pappalardo]. In a classic case of good news, bad news, DARPA improved aerodynamic stability over the first test only to watch unexpected buffeting rip large swaths of skin off the craft in the second [sources: DARPA; Ferran].

Where does that leave the future commuter, who's more interested in taking meetings than tasking missiles? It's difficult to say. As of November 2012, a handful of candidates have lined up to fill Concorde's long-empty market space, from giants like Boeing and European Aeronautic Defence and Space Company N.V. (EADS), the Airbus parent company, to up-and-comers like XCOR and HyperMach. Meanwhile, Virgin Galactic and Sierra Nevada Space Systems maintain their focus on developing suborbital space planes.

Yet, despite what their marketing flacks might call them, most of these vehicles are supersonic, not hypersonic, and for good reason. Crossing the punishing threshold of Mach 5, the traditional delineation between supersonic and hypersonic, means contending with atmospheric physics gone mad.