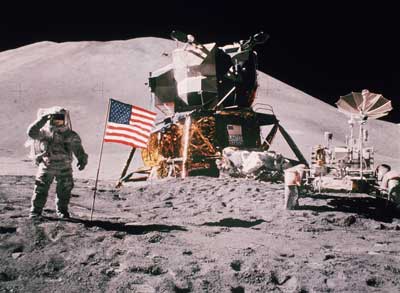 Back we go! NASA announced that a permanent lunar base will be completed as early as 2024. Above, Jim Irwin from the 1971 Apollo 15 mission.
Hulton Archive/Getty Images

If all goes according to plan, humans will have been living in space for more than 20 years when NASA's centennial celebration rolls around in 2058. As part of President Bush's "Vision for Space Exploration" plan, the agency announced in 2006 that astronauts would break ground on a lunar base settlement no later than 2020 [source: Johnson].

As billionaire entrepreneurs including Richard Branson of Virgin and Jeff Bezos of Amazon.com strive to get the affordable space tourism industry up and running, NASA and possibly other cooperating countries will be constructing what could be the precursor to human space colonization. That's right, sci-fi novel plots could be coming true in 20 years.

Beginning with short flights and working up to extended trips, NASA estimates that the lunar base could be functional by 2024 [source: Johnson]. It hopes to send out a Lunar Reconnaissance Orbiter to help select a prime location for the base, probably at one of the moon's poles, by October 2008 [source: NASA]. Aside from experiments in outer space life, NASA says that astronauts will use the lunar base as a launch site for a manned mission to Mars.

The $100 billion-plus plan could run into problems on Earth, namely that hefty price tag.

To meet monetary needs, NASA is shutting down its space shuttle program and shifting funding for the International Space Station. Several scientists, including some employed by NASA, see the manned lunar mission as a fantastic money waster that diverts resources from more practical research projects. Whether the government can provide adequate federal funding for the colossal project also remains in doubt.

Since NASA began investigating the feasibility of space colonization in the 1970s, people recognized that lack of available cash is one of the most immediate obstacles for getting humans from their terra firma houses to Jetsons-style space pods. Transporting freight -- not to mention people -- hundreds of miles above the Earth costs millions. The per pound cost of delivery to the moon hovers around $25,000 [source: Jones].

In spite of the challenges, some people view space migration as essential to human survival. Renowned physicist Stephen Hawking said in 2006 that people must begin colonizing planets in other solar systems in the event of an asteroid collision or nuclear war [source: Reuters]. Supposing Hawking and others are correct, just what could these space settlements look like? Find out on the next page. 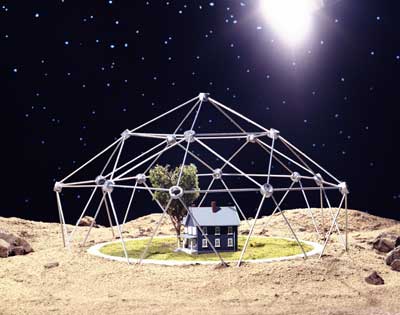 Where's That Funky-shaped Comet 'Oumuamua From?
How Old Is Earth and How Did Scientists Figure It Out?
What Are the 'Blueberries' on Mars?