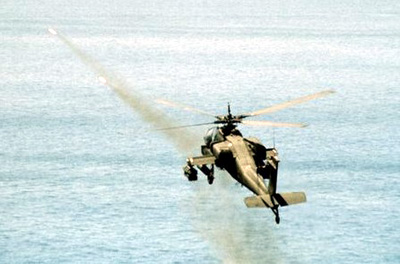 The Apache's chief function is to take out heavily armored ground targets, such as tanks and bunkers. To inflict this kind of damage, you need some heavy fire power, and to do it from a helicopter, you need an extremely sophisticated targeting system.

The Apache's primary weapon, the Hellfire missile, meets these demands. Each missile is a miniature aircraft, complete with its own guidance computer, steering control and propulsion system. The payload is a high-explosive, copper-lined-charge warhead powerful enough to burn through the heaviest tank armor in existence.

The Apache carries the missiles on four firing rails attached to pylons mounted to its wings. There are two pylons on each wing, and each pylon can support four missiles, so the Apache can carry as many as 16 missiles at a time. Before launching, each missile receives instructions directly from the helicopter's computer. When the computer transmits the fire signal, the missile sets off the propellant. Once the burning propellant generates about 500 pounds of force, the missile breaks free of the rail. As the missile speeds up, the force of acceleration triggers the arming mechanism. When the missile makes contact with the target, an impact sensor sets off the warhead.

The original Hellfire design uses a laser guidance system to hit its mark. In this system, the Apache gunner aims a high-intensity laser beam at the target (in some situations, ground forces might operate the laser instead). The laser pulses on and off in a particular coded pattern.

The laser-guided Hellfire system is highly effective, but it has some significant drawbacks:

The Hellfire II, used in Apache Longbow helicopters, corrects these flaws. Instead of a laser-seeking system, the missile has a radar seeker. The helicopter's radar locates the target, and the missiles zero in on it. Since radio waves aren't obscured by clouds or obstacles, the missile is more likely to find its target. Since it doesn't have to keep the laser focused on the target, the helicopter can fire the missile and immediately find cover.

We'll look at the Apache's rockets next.