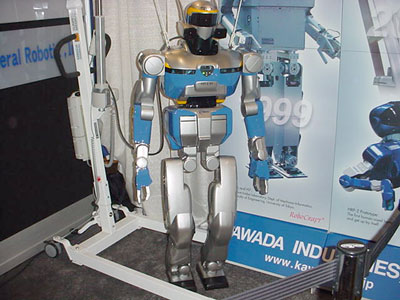 In addition to ASIMO, there are some other pretty sophisticated humanoid robots out there that appear to do a lot of the same things. Most of them are built on a much smaller scale and are intended more for entertainment than service. Right now, ASIMO's greatest competition in terms of technology seem to be:

There are also several different robots used in hospitals around the world that navigate hallways and take elevators to deliver patient records, x-rays, medicines and other things all over the hospital. They travel on wheels and are programmed with the hospital layout or they identify and follow markers and bar codes placed on the walls.

Robots have been in use in many areas since the 1960s. With computer processors getting increasingly more powerful and technology in robotics expanding into new areas, it won't be long before we do have a "Rosie" to cook our meals and clean our houses.

For more information on ASIMO and other robots, as well as the technological advances that make humanoid robots possible, check out the links below.

A Robot About Town

ASIMO has charmed audiences at media events, television shows, and even Disneyland. You may have seen ASIMO: