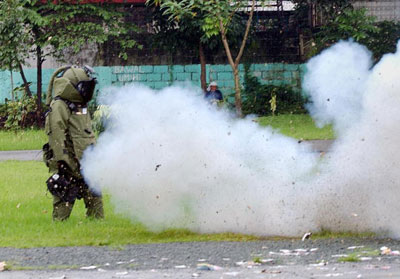 A police bomb disposal expert wearing a blast-resistant bomb suit is unscathed after a test explosion at the police camp in Manila, Philippines, in October 2003.
Romeo Gacad/AFP/Getty Images

At this very instant, these three scenarios may be unfolding:

When bombs, unexploded ordnance (military equipment that includes artillery, cannons and other equipment) or threatening devices are found, they must be neutralized, disarmed, moved or exploded in a safe and controlled manner.

­­Robots can sometimes be used for these tasks, but all too often the job calls for the expertise, bravery and rock-steady hands of an e­xplosive ordnance disposal (EOD) technician. The term "EOD" is most often used by the military; civilian and law enforcement agencies refer to these devices as unexploded ordnances, or UXO.

Most pe­ople dress for work in some combination of cotton and khaki, but an EOD technician wears anything from ceramic plates to Kevlar, the material used in bulletproof vests. Various manufacturers create many different types and designs of bomb suits and other blast-resistant clothing. However, all of them share common components, such as body armor and helmets.

Soon, this clothing may incorporate anything from nanotubes to special materials that thicken as they're stretched out. But before we get much further into our discussion of what blast-resistant clothing is made of and how it protects, let's take a look at the bombs it protects against.

What happens when bombs explode? How can they injure and hurt us? And how does blast-resistant clothing anticipate and protect against these injuries? Find out in the next section.

How Bomb Blasts Cause Damage

A bomb is basically some type of casing or shell that contains explosive material. The casing can be anything from a steel-walled artillery shell to a glass bottle or a sealed-shut length of lead pipe. It can even be as ordinary as a coffee tin or an automobile. Once the casing is penetrated by the force of the explosion, it will fragment outward, each piece of the shell serving as a deadly projectile. The explosive material inside the shell could be any type of high explosive, be it TNT or Semtex. (You can read more about bombs in How Bombs Work.)

A bomb causes damage in several different ways, depending on the point at which the explosion impacts. These different points include the blast wave, shock waves, fragmentation, heat and the blast wind.

So what can you wear to protect yourself against a blast? Find out in the next section.

Military neurosurgeons are reporting an increase in brain injuries caused by shockwaves and blast wind. The massive change in pressure can result in lasting neurological damage, but this damage can be difficult to diagnose because victims may appear physically unharmed. A 2005 report from Walter Reed Army Medical Center indicates that two-thirds of all wounded soldiers who are unable to immediately return to active duty suffer from injuries to the brain [source: Glasser].

A blast-resistant suit provides the most comprehensive protection against a blast. When a bomb strikes a blast-resistant suit, the force is diminished by the suit's tightly woven fibers. These fibers spread the blast's force throughout the suit. Ballistic plates help deflect force and repel the shrapnel and secondary fragmentation. The heat and flames produced by a bomb will be neutralized by the flame-resistant quality of the suit. You can read How Body Armor Works and How Liquid Body Armor Works for further explanation.

Let's look at the materials and components that do the diffusing.

Bomb suits are made of Kevlar or some other aramid-based product. Aramid (the generic name for Kevlar) consists of synthetic fibers woven from polymers -- large molecules made from strands of smaller molecules called monomers. Aramid's outstanding strength-to-weight ratio makes it an ideal fabric for bulletproof and blast-resistant clothing.

Additional foam or other padding may be incorporated throughout the bomb suit. This offers protection to the wearer not only from flying debris, but also from the force of impact that occurs when the wearer of the suit is thrown to the ground.

The garment has internal pockets consisting of webbing and Velcro inside which ballistic plates can be inserted. These plates are made of steel, aramid or coated ceramic. They're designed to protect the wearer from fragmentation.

Although great advancements are being made in blast-resistant clothing, there are limits to the level of protection such materials can afford an individual. If a bomb is big enough, and you are close enough to it, there may be nothing that can prevent the damage the bomb blast and resulting fragmentation and shockwaves will do to you. No materials or structures are ever entirely bombproof.

For some professions, it's not practical to wear a full blast-resistant suit every day on the job, but it's still necessary to have protection against bombs and IEDs. How do these professionals protect themselves? We'll learn about some other blast-resistant options on the next page.

Many suits are designed without protection for the wearer's hands. This is calculated rather than careless: The technician will likely need his or her hands free to defuse a bomb. 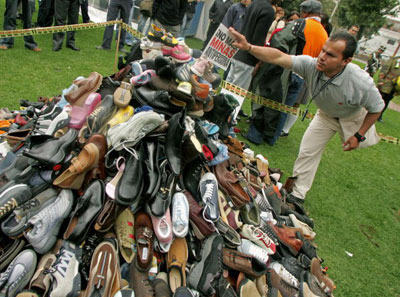 Edgar Moreno, victim of a landmine blast, places a flag bearing the words "No more anti-personnel mines" on a heap of shoes in Bogota, Colombia.
Mauricio Duenas/AFP/Getty Images

Not everyone who encounters a bomb will be fully garbed in a blast-resistant suit. An exposed turret-gunner in an armored vehicle that's passing a roadside bomb is at as great a risk as an EOD technician tasked with approaching and disarming a similar device. Both must wear blast-resistant clothing -- but different kinds to fit their needs. Law enforcement officers and FBI officials will also need to protect themselves on the job. No matter what type of bomb they may encounter -- pipe bomb, letter bomb, truck bomb or unknown explosive device -- local law enforcement agencies and the FBI must risk their lives to disable the weapon.

Humanitarian relief workers also need protection when demining a landmined nation or delivering supplies to the people who live there. Two protective accessories they use include anti-mine boots and demining aprons.

Anti-mine boots are used by those who demine minefields or who must work near or pass through heavily mined areas. These boots have soles that are several inches thicker than those of regular boots. Tabre is another material that's sometimes used in soles. Tabre is constructed from tiny, resin-coated grains of stone and is designed to diffuse the force of the blast. When the shock wave strikes the network of tiny stones, its energy is forced through the maze they form, which releases and decreases energy [source: BBC]. Boots may also incorporate materials like steel plates as well as Kevlar to protect the foot against penetration from shrapnel or debris.

Demining aprons are also used in humanitarian missions -- often carried out by the United Nations -- that involve clearing of heavily mined areas within war-torn nations. The demining apron provides protection where a person needs it most: in the front, neck, shoulder and groin area. Much like a chef's apron, there is no back to this garment (the wearer doesn't need protection from the rear), which cuts down on its weight and excessive heat it generates.

In the next section, we'll take a look at some of the blast-resistant materials and technologies of tomorrow and beyond.

Blast-resistant Technology of the Future

There are several new and emerging technologies in the explosive ordnance disposal (EOD) field. Let's examine a few of them.

For more information on bomb, blast-resistant technology and other related information, visit the links on the next page.

Back to the Beginning

In World War I, the increased manufacture and use of artillery shells led to many "duds" -- unexploded ordnance (UXO). These duds had to be safely removed from both the battlefield and civilian areas. This, in turn, necessitated the advent of bomb disposal units. In the beginning, the training was mostly done on the job: Disarming the ordnance was a new and extremely dangerous task.

In World War II, the Nazis created new sources of confusion and calamity by designing bombs that behaved like duds, but were, in fact, set on long timers or designed to explode when the shell casing was breached by a UXO member. The bomb disposal teams effectively became the target of the bombs. This led to a lethal match between the bomb-makers and the UXO technicians.

Since then, bomb disposal advancements and methods have been held to the highest levels of secrecy so that bomb designers will find it harder to circumvent the efforts of the UXO teams.