The space probe Pioneer 10 was launched on March 3, 1972. After a journey through our solar system, it entered deep space, on a trajectory that will take it to Aldebaran, a star located in the constellation Taurus. What will Pioneer 10 encounter as it makes its two-million-year journey across interstellar space? Nothingness? A void? Complete blackness? 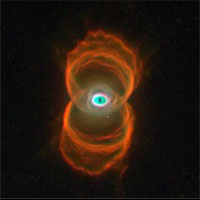 Courtesy NASA and STScI
Nebulae, such as the Hourglass Nebula can inspire awe and wonder. See more nebula pictures.

In reality, the great emptiness that exists between the Sun and Aldebaran is not empty at all. It's filled with dust and gases, what astronomers call inte­rstellar matter. Sometimes, this interstellar matter is collected in such a way that it's visible to Earth-bound observers, either as a glowing cloud or as a dark silhouette against a lighter background. These clouds are nebulae. A single such cloud is a nebula, which is Latin for "mist" or "cloud."

Until the 20th century, astronomers used the term nebula to describe any glowing, cloud-like object observed from Earth. The telescopes of the day revealed very little detail about these objects, but astronomers could see enough to know that these nebulae came in different shapes. Some were called spiral nebulae; others were called elliptical nebulae. Then, in the 1920s, American astronomer Edwin Powell Hubble, using the most powerful telescope of his day, discovered that many of the objects believed to be vague, indistinct clouds were in fact galaxies. Specifically, he observed that the Andromeda spiral nebula was actually a spiral galaxy.

Today, astronomers know that galaxies and nebulae are unique objects with different characteristics. Yet this distinction alone is not enough to fully explain what nebulae are and how they work. This article will go beyond the fundamental definition to provide a more thorough overview of nebulae -- what they're, what they're made of, where they're located and what they do. Our first step is to understand a nebula's place in the grand design of the univer­se.­­