by Gallagher Flinn
Prev NEXT
10 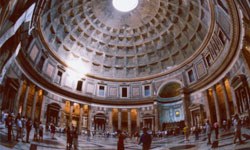 They came, they saw, they built some domes. The Pantheon is a pretty fabulous example of how the Romans conquered interior space.
Grant V. Faint/Iconica/Getty Images

We take interior space for granted in the modern world, but we shouldn't. Our enormous vaulted arches, huge atriums (a Latin word, by the way), hollow steel and glass skyscrapers, even a simple high school gymnasium -- all of these structures were inconceivable in the ancient world.

Before the Romans perfected dome-building, even the best architects had to deal with the problem of a heavy stone roof, forcing them to crowd the floors of temples and public buildings with columns and load-bearing walls. Even the greatest architectural achievements before Roman architecture -- the Parthenon and the Pyramids -- were much more impressive on the outside. Inside, they were dark, confined spaces.

Roman domes, by contrast, were spacious, open and created a real sense of interior space for the first time in history. Stemming from the realization that the principles of the arch could be rotated into three dimensions to create a shape that had the same supportive power but an even larger area, dome technology was mostly due to the availability of concrete, another Roman innovation that we'll discuss later in this article. This substance was poured into molds on a wooden scaffolding, leaving the hard, strong shell of the dome behind.