by Gallagher Flinn
Prev NEXT
8 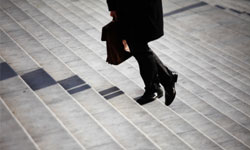 We take concrete for granted (especially when it's under our feet), but, as the Romans knew, it's a remarkable building material.
Martial Colomb/Photographer’s Choice RF/Getty Images

As far as innovations in building material go, a liquid rock that's both lighter and stronger than regular stone is hard to beat. Today, concrete is so much a part of our daily lives that it's easy to forget just how revolutionary it is.

Roman concrete was a special mixture of rubble, lime, sand and pozzolana, a volcanic ash. Not only could the mixture be poured into any form you could build a wooden mold for, it was much, much stronger than any of its component parts. Though it was originally used by Roman architects to form strong bases for altars, starting in the 2nd century B.C., the Romans began to experiment with concrete to produce more freestanding forms. Their most famous concrete structure, the Pantheon, still stands as the largest unreinforced concrete structure in the world after more than two thousand years.

As we mentioned earlier, this was a major improvement on the old Etruscan and Greek rectangular styles of architecture, which demanded heavy walls and columns everywhere. Even better, concrete as a building material was cheap and fireproof. It could also set underwater and was flexible enough to survive the earthquakes that plague the volcanic Italic Peninsula.