by Gallagher Flinn
Prev NEXT
4 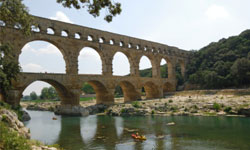 When it came to building aqueducts, the ancient Romans were pros.
©iStockphoto/Thinkstock

Along with roads, aqueducts are the other engineering marvel that the Romans are the most famous for. The thing about aqueducts is that they're long. Really long. One of the difficulties of watering a large city is that once the city gets to a certain size, you really can't get clean water from anywhere near it. And though Rome sits on the Tiber, the river itself was polluted by another Roman engineering achievement, their sewer system.

To solve the problem, Roman engineers built aqueducts -- networks of underground pipes, above-ground water lines and elegant bridges, all designed to channel water into the city from the surrounding countryside. Once in Rome, water from the aqueducts was collected in cisterns before being distributed to the fountains and public baths the Romans loved so dearly.

Just like their roads, the Roman aqueduct system was incredibly long and complicated. Though the first aqueduct, built around 300 B.C., was only 11 miles long, by the end of the third century A.D., Rome was supplied by eleven aqueducts, totaling more than 250 miles in length.