Browse the article What was the first steel-framed skyscraper? 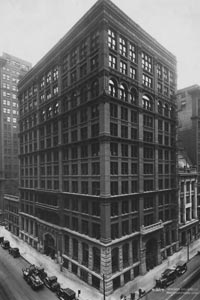 As of 2011, the Burj Khalifa, a skyscraper built from 2004 to 2009 in Dubai, is the tallest structure in the world. It stands 828 meters (2,717 feet) tall -- more than half a mile -- and consists of more than 163 inhabitable floors below its spire. All told, the massive building contains 206 stories and dominates the Dubai skyline [source: Glass Steel and Stone]. The Burj Khalifa is the latest in a long line of skyscrapers that push architectural design to its limits.

Though we've been building homes and offices and businesses for hundreds of years, it wasn't until the year 1884 that the word "skyscraper" became part of the architectural lexicon. Skyscrapers are usually tall, of course, but there's no hard-and-fast rule declaring that skyscrapers have to reach a certain height. So what makes a skyscraper a skyscraper? It all started with the Home Insurance Building in Chicago. The 10-story structure is widely recognized as the first in the world to use a steel skeleton to support its weight. That innovation went on to become the primary qualifier for buildings to be classified as skyscrapers in modern architecture [source: Chicago Architecture Info].

Once architects began using iron and steel in construction, they were able to build taller, stronger structures without relying on thick, heavy stone walls for support. Those incredibly strong metals paved the way for buildings 10, 20 and eventually over 100 stories tall. But strength only goes so far -- the taller buildings get, the more complicated construction becomes. Architects have to deal with issues like wind resistance to ensure heavy winds at high altitudes don't twist and destroy their buildings. Today's architects wouldn't even have such lofty concerns were it not for the Home Insurance Building and its designer, a man named William Le Baron Jenney.

While designing the Home Insurance Building in 1880s Chicago, William Le Baron Jenney had a brilliant idea: Use metal, rather than heavy stone, to hold up the 10-story structure. At one point, the city of Chicago actually halted construction to investigate the stability of the building and its new approach to assembly, which used a frame to support the building's weight instead of load-bearing walls [source: PBS]. Jenney's plans were sound -- the metal frame was better at supporting weight.

Jenney began construction of the building with an iron frame but switched to steel partway through the project. This would prove to be an incredibly important decision for the history of architecture, as the Home Insurance Building became the template for skyscraper design going forward. Though it was expensive, the use of steel posed a number of advantages aside from stability: Thinner walls made for more spacious interiors and more windows, and fire posed less of a hazard than it did to older masonry structures [source: Chicago History].

The Chicago School of Architecture

The "First Chicago School" of architecture was born after the fire of 1871 swept through the city. In the rebuilding process, architects began experimenting with new techniques and styles. William Le Baron Jenney's use of steel in the Home Insurance Building in the 1880s kicked off a metal renaissance, while other architects influenced the development of the school's aesthetics. Steel had an impact there, too -- the use of metal frames manifested in the designs of buildings in the 1880s and 1890s [source: Chicago History].