A Boat-like Bridge to History 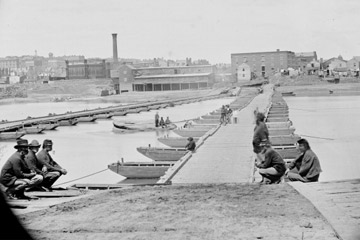 Floating, or pontoon, bridges (like this one in Virginia) were commonly used in the Civil War era.
Buyenlarge/Archive Photos/Getty Images

Surely ancient peoples must have looked longingly at unreachable shores on the other side of rivers and wished for bridges to carry them there. Wishes alone couldn't build those bridges, but war could.

Most early floating bridges were built for the purposes of war. The Chinese, Romans, Greeks, Mongols and other peoples all used versions of pontoon bridges to move soldiers and equipment, usually across rivers too deep to ford.

The most primitive floating bridges were wooden boats placed in rows with planks laid across them to support foot traffic, horses and wheeled carts. At each shore these bridges were secured, often with ropes, to keep them from drifting with the current or wind.

One of the most storied ancient floating bridges was created at the behest of the Persian king Xerxes. Xerxes set out to conquer Greece in 481 B.C., but first, his huge army had to cross the Hellespont, a strait about 4,409 feet (1.3 km) wide.

Xerxes commanded his men to build a floating bridge, but a violent storm subsequently destroyed their work. To show his anger toward the sea, Xerxes told his men to symbolically whip the water 300 times, and he also had leg shackles thrown into the sea. He punished the engineers of the failed bridge by beheading them.

A second bridge was built, and nearly 400 ships were used to keep its surface afloat. The boats were all tied together with heavy flaxen and papyrus ropes and weighted with heavy anchors to hold them in place, and there was an opening left so that small vessels navigating the strait could still pass the bridge.

Logs were used for the bridge's surface, and these were topped with brush and soil. And there were barriers on each side so that horses (and perhaps men) wouldn't be spooked by walking so close to their potential watery ends. This one survived, letting hundreds of thousands of soldiers pass over the strait. Ultimately, this army attacked and captured Athens.

Many wars since then have seen floating bridges in action, including the American Civil War and both World Wars. They continue to be vital for campaigns that must cross bodies of water to engage (or run away from) enemies.

Modern pontoon bridges are extremely portable and can often ride on a semi-truck trailer. They usually combine an inflatable underbelly that's topped with a metal structure that supports large vehicles and men.

Not all pontoon bridges are built for warfare. Keep reading, and you'll see how more permanent ones are constructed for more peaceful ends.