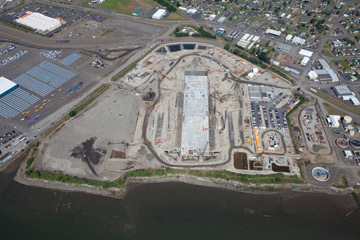 A replacement bridge for the Evergreen Point bridge is in the works. Here’s an aerial view of the Washington State DOT / Kiewit General casting basin facility that’s under construction in Aberdeen, Wash.
Image courtesy of Soundview Aerial Photography

The Governor Albert D. Rossellini Bridge—Evergreen Point bridge (often called just the SR 520 bridge) in Seattle is the longest floating bridge on the planet. It is 7,497 feet (2,285 meters), or 1.4 miles (metric), long and spans Lake Washington, letting vehicles pass to and from Seattle and Bellevue, Washington.

After three years of construction, the four-lane toll bridge opened in 1963. It wasn't the first floating bridge on Lake Washington; that was actually the Lake Washington Floating Bridge, which was built in 1940 and wound up as part of Interstate 90. But the SR 520 bridge is significantly bigger than its forbearer.

It's four lanes and 60 feet wide and is supported by 33 pontoons. Those individual pontoons are enormous, at around two and a half stories tall, and 360 feet (110 meters) long -- that's longer than four gas tanker semi-trucks placed end to end. The pontoons are secured by 62 anchors that weigh around 77 tons each.

If those numbers don't float your brain's boat, consider this -- the SR 520 is getting a major upgrade. A new version of the bridge will have six lanes and a bicycle path. It will be 115 feet wide and have 77 pontoons, each of which will be 360 feet long, 75 feet high and 28 feet tall. Perhaps most incredibly, each pontoon will weigh around 11,000 tons, which is the equivalent of 23 Boeing 747 jets [source: Washington DOT].

The bridge is also upgradeable. Currently, the two center lanes will be for HOV (high-occupancy vehicles) only, but in the future, a light-rail system could be placed here instead (although this would require even more pontoons to support the additional weight).

You might wonder why in the world Washington State would build such a mammoth structure. The Seattle metropolitan area is home to large companies with equally large workforces. All of those people need efficient transportation options, and the direct route across Lake Washington is the fastest. But that route is curved, which makes a suspension bridge impossible, and the lake is too deep for a conventional bridge.

But the bridge won't come cheap. The budget for the new crossing is currently $4.65 billion [source: Washington DOT].

For that kind of price tag, let's hope this bridge lasts for a very long time. But because Murphy's Law always seems to assert itself in the end, something will break -- floating bridges are no exception. Keep reading, and you'll find out more about famous bridges and their infamous moments.