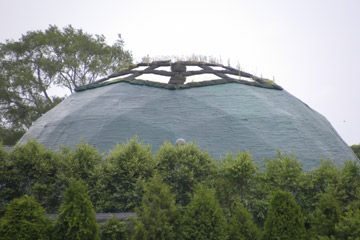 The Long Island Green Dome, in New York, has the same kind of ultrastrong roof found in all geodesic domes. In addition, it sports a unique green roof on which various kinds of plants can grow.
Image courtesy Kevin Shea

You can find eco-friendly, sustainable, and locally made and grown products on shelves in almost every store these days. So perhaps it's no surprise that some people want to make the buildings themselves more in tune with the environment, too. Or it could simply be that people just really like the idea of living inside giant soccer balls, which is what geodesic domes look like. In short, geodesic domes are structures that look like half spheres made up of many triangle supports.

Geodesic domes (and the homes based on those designs) are extremely efficient and inexpensive. Those traits, when considered in the context of today's economic and environmental issues, mean domes are enjoying the kind of popularity not seen since their heyday in the late 1960s and early 1970s. Many communities throughout the world boast geodesic domes, either as homes or as commercial structures, and you can't miss them -- they're so futuristic-looking that they make it seem like an alien mothership has landed and begun a planetary takeover.

And if fans of geodesic design have their way, that's exactly what these domes eventually will do. As the push for sustainable living continues and our population burgeons, domes may offer affordable and smart ways to house humans. Or, they could simply cause a lot of complications. As you'll soon see, there are plenty of arguments about how useful these domes really are (or not).

But there are some inarguable points regarding geodesic domes. The first is that they are eye-catching. Maybe because these shapes are so rare in architecture, it's hard not to let your eyes be drawn to these domes.

Another concrete fact about the domes is that they come from geodesic designs, which are based on a polyhedron. A polyhedron is a three-dimensional solid that's made up of many flat faces. Both pyramids and prisms are examples of polyhedrons.

One of the most common polyhedrons used for geodesic dome designs is called an icosahedron, which is a solid shape composed of 20 flat faces. Each face is an identical equilateral (all sides are equal) triangle. Rotate the edges of those triangles slowly toward an imaginary center and eventually you wind up with a rough version of a sphere, called a geodesic sphere. Cut that sphere in half and you have an approximation of a geodesic dome.

We'll stop with the esoteric language for now. On the next page, you'll find out more about the history of geodesic domes -- and how some people thought they might mean housing salvation for humankind.