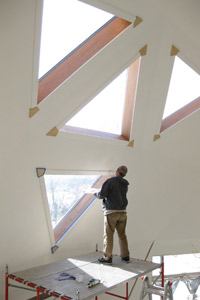 The triangular windows of this home serve as a reminder of the geometric shape that helps make this dome structure so strong.
Image courtesy Timberline Geodesics

People have been building domes for centuries. Ancient peoples such as the Romans applied their masonry skills -- and their knowledge of the arch -- to create massive domes. But those domes needed equally large supporting walls keep the entire structure from crashing to the ground. In short, huge old domes were heavy and bound to fail at some point.

Geodesic domes are different. Not only do they incorporate the strength of a strong arch shape, but they're also made up of many triangles. Pair domes with triangles, and you have one extremely durable structure. Triangles are the strongest shape because they have fixed angles.

Much of that durability results from the characteristics of triangles, which are the superheroes of shapes. Triangles are the strongest shape because they have fixed angles and don’t distort very easily.

Michael Busnick, owner of American Ingenuity, which sells dome homes, says triangles are key to making domes strong. “(Domes) are three-dimensional structures using stable triangles approximating spheres to create multiple load carrying paths from point of load to point of support. The triangle is the only arrangement of structural members that is stable within itself without requiring additional connections at the intersection points to prevent warping of the geometry.”

In other words, apply pressure to one edge of a triangle, and that force is evenly distributed to the other two sides, which then transmit pressure to adjacent triangles. That cascading distribution of pressure is how geodesic domes efficiently distribute stress along the entire structure, much like the shell of an egg.

The pattern of those triangles is critical to the structure of geodesic domes. To understand why, consider first a basic four-sided square. If you lay many squares perpendicular (at right angles) to each other, they can lay neatly into a flat plane.

The same isn't true of pentagons or hexagons. Try to lay these shapes flat in the same manner as the square and it won't work. But tilt these shapes inward into a ball or sphere shape and the sides match up nicely as tessellations, which are simply patterns that can be repeated to create another shape without overlapping or spaces between the shapes. And it just so happens that pentagons and hexagons can be neatly divided into triangles, the foundation of geodesic domes, so they're also exceedingly strong.

Different tessellations result in varying designs for dome buildings. On the next page, you’ll read more about how designs make it easier -- or much harder -- to assemble domes.