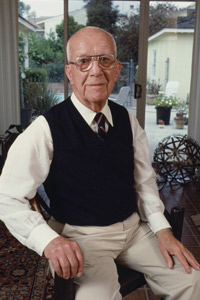 In 1953, the Ford Motor Company hired Bucky Fuller to create a dome that would enclose a central courtyard at the company’s headquarters. The gap over the courtyard was 93 feet (28 meters) across, and traditional building techniques would make a gigantically heavy dome that would crush its supporting walls.

Enter Fuller and his geodesic designs. He convinced the Fords that his plan would weigh less than 10 tons (9 metric tons) and cost much less than an old-fashioned dome. Within months, Fuller had disproved all of his doubters by finishing the project ahead of schedule, covering the opening above the courtyard as planned. Engineers around the world were amazed, and Fuller became famed for his expertise.

A few years later, a leak was spotted in the dome, and a team was sent to fix it. Unfortunately, they accidentally set the dome on fire and it was destroyed. No matter -- Fuller’s idea had already taken hold.

He was later hired to create what would become one of his most famous domes, this time for the 1967 International and Universal Exposition in Montreal. This 250-foot (76-meter) dome was nearly 200 feet (62 meters) tall and served as an architectural centerpiece to the fair.

Fuller liked to think big. After his success at Ford, he even speculated that a huge dome could cover part of Manhattan Island. The dome would moderate temperatures, and equipped with air filters, could keep people healthier by lowering germ and virus counts. What’s more, Fuller thought the dome would pay for itself by eliminating the cost of snow removal. His audacious idea never quite caught on, though.

Not all domes are built with immensity or grandeur in mind. Some are very practical. On the next page, you’ll read all about how some imaginative homeowners trade blocky, rectangular houses for domes, sweet domes, as homes.

Carbondale, Ill., is home to a prototype dome built by Bucky Fuller. It was the only dome he ever lived in -- and it’s also falling apart due to storm damage and neglect. A restoration fund drive is currently under way to save the building.