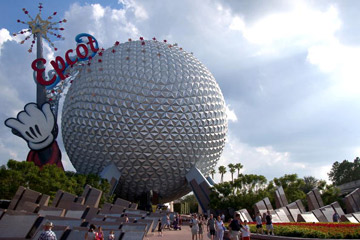 There's no sure count of how many geodesic domes exist in the world, but the big ones are easy to spot.

The world's largest dome resides in Fukuoka, Japan and is aptly named the Fukuoka Dome. This huge dome serves primarily as a baseball stadium and seats more than 30,000 people.

It also has a unique retractable roof. The roof comprises three steel-framed titanium panels that have a surface area of around 59,795 square yards (50,000 square meters). Altogether, the struts and panels of the roof weigh about 12,000 tons (10,886 metric tons) [source: Web Japan], yet it takes only about 20 minutes for the panels to retract, exposing spectators to the skies above the city.

Tacoma, Wash., is home to the world's largest wooden dome: the Tacoma Dome. This structure has enough room to seat more than 17,000 fans for basketball games, thanks to its 530-foot (160-meter) diameter and 152-foot (46-meter) height. Although the arena was primarily constructed as a home for the former professional Seattle Supersonics basketball club, it's big enough to be used for the 100-yard long fields of football games, although this significantly reduces seating capacity [source: Tacoma Dome].

The Eden Project, located in Cornwall in the United Kingdom, is another dome masterpiece. The project includes two huge domes that are climate controlled to emulate different regions from around the world. One dome, for example, encloses a very warm and humid tropical environment that keeps the equatorial plants inside flourishing.

One of the most iconic geodesic dome designs in the world is actually a complete sphere. It’s Spaceship Earth, an 180-foot (54.9-meter) tall, silver geosphere at the center of Epcot theme park, which is part of the Walt Disney World Resort in Orlando, Fla. Epcot is an acronym for Experimental Prototype Community of Tomorrow, which was Walt Disney’s idea for an experimental, utopian community.

Unlike most domes, this one doesn't even try to repel the rain with any sort of shingles or panels. Instead, the panels are arranged with 1-inch gaps between them. Water flows into these spaces and to the bottom of the building, where it's used in one of the park's lagoons.

There's a ride inside the sphere that's also called Spaceship Earth. Riders move briskly through scenes of humankind's development, from prehistoric cave dwellers to a modern, technology-driven society. For that reason, maybe the Epcot sphere is a good symbol for geodesic domes as a whole.

These rounded structures represent our capacity for imaginative thinking and building, as well as our ability to create concrete, useful items from abstract ideas and theories. Although geodesic domes may never be as popular as Bucky Fuller and his acolytes hoped, these half-spheres are a testament to the inventiveness and persistence of people everywhere.