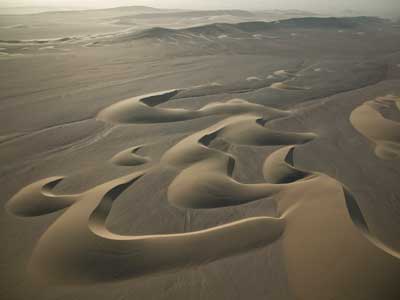 Sand dunes develop into all shapes and sizes, but that doesn't stop scientists from piling them into generalized categories. By using satellite and aerial photography of the world's deserts, the United States Geological Survey (USGS) has identified five types of sand dunes:

­Coastal sand dunes are a bit different from desert dunes. They form when an accumulation of sand blows inland from the beach. Coastal dunes always form in the predomi­nant wind direction, but their shape and size depends on the shape of the beach. If a beach is shallow-sloped, more sand deposits on the shore, resulting in bigger dunes. On a steep beach, more sand washes back out to sea, and the dunes are smaller. Coastal dunes are a unique ecosystem, and they help to protect the surrounding area from erosion. Vegetation like dune grass acts as a stabilizer for coastal dunes.­

Can a Sand Dune Swallow You?

Generally, it's safe to walk around on sand dunes -- although you should always follow the guidance of posted signage. But loose sand can be dangerous. Deteriorating sand dunes are unstable and can collapse unexpectedly. Tunneling into sand dunes can also cause collapse. In October 2008, an 11-year-old boy died when a sand dune he had crawled into collapsed on him [source: Schevitz].