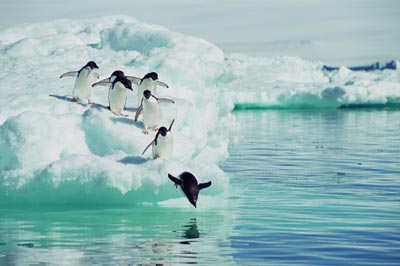 Initial appearances suggest that icebergs are sterile blocks of ice floating in frigid, lifeless waters. In fact, icebergs generate their own mobile ecosystems.

Even in the coldest seas, icebergs are always melting at least a little bit. This melting has a major impact on the ocean around an iceberg. The freshwater from the berg creates a pool of freshwater that can extend a nautical mile away from the iceberg [source: Stone]. This water is colder than the surrounding seawater; the temperature variation creates thermal currents in the vicinity of the iceberg.

Life thrives on and around an iceberg. Young icefish hide in small iceholes to avoid predators, while a variety of invertebrates like jellyfish and siphonophores congregate in the area. Many of them come to feed on krill, tiny shrimplike creatures. Snow petrels nest on the icebergs and feed on the sea life nearby.

Icebergs can have a negative impact on ocean and animal life as well. When massive Antarctic bergs get stuck in certain areas, they block the migration path of Emperor penguins. The penguins need to get to the ocean to feed -- with too many icebergs in the way, they have to walk much farther [source: Space.com]. In areas where oceanic currents bring many icebergs, the ocean floor is often blasted clear of all life. The huge ice chunks extend deep under water, scraping and gouging the sea floor. Over the course of many years, these impacts render the sea floor almost completely lifeless.­

Could icebergs solve the water crisis?

Icebergs would make great sources of freshwater. The water contained in iceberg B-15 could have supplied the entire United States for five years [source: Stone]. On a hot summer day, the thought of a glass of ice-cold iceberg water sounds very appealing. The idea has been seriously considered -- the RAND Corporation, which provides research to the U.S. military, drafted a feasibility report on the subject. They concluded that a delivery system allowing a 10 percent yield (of the total iceberg output) could provide water for 500 million people at a cost of $8 per 1,000 cubic meters [source: RAND]. The icebergs would probably be towed close to the water's ultimate destination using massive insulating sheets to slow melting. Then the ice would be "harvested" to produce freshwater.