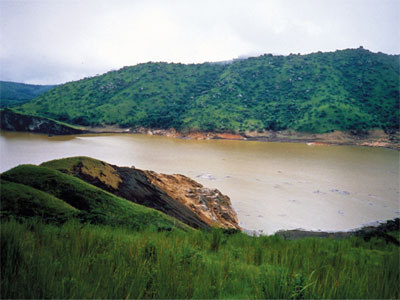 More than a week after its eruption, Lake Nyos has lost its blue hue and turned brown. You can also see vegetation damage caused by the water surge that followed the emergence of the toxic gas cloud.
Photo courtesy ­U.S. Geological Survey

­Scientists soon learned that the cloud contained carbon diox­ide (CO2). That finding explained the cloud's heaviness, since CO2 is denser than air. The cloud was actually CO2 mixed with air. The CO2 killed directly by shutting off people's consciousness and breathing. When the CO2 concentration was 15 percent or less, people lost consciousness and later revived. Individuals who inhaled more than 15 percent CO2 stopped breathing in minutes and died.

As for why the lake ejected CO2 -- up to a third of a cubic mile of it -- scientists disagreed. One camp believed a volcanic eruption released CO2 and blew up the lake. Another camp thought CO2 was gradually leaking into and being stored in the lake. When the lake exploded, it released the gas in a gigantic, deadly burp.

"While the two camps of scientists were fighting, they agreed that CO2 killed the people, and the people would be safer on higher ground," says William Evans, a geochemist with the U.S. Geological Survey who investigated the disaster. The Cameroonian government acted accordingly.

Evans' team installed CO2 monitors on the lakeshore. The monitors were hooked to sirens that would sound if too much CO2 entered the air. People knew the alarms meant they should go to high ground.

As years passed, scientists resolved the debate about the origin of the CO2. After measuring gas at the bottom of Lake Nyos, they found a CO2-rich layer, where levels of the gas were rising over time, suggesting gradual leakage into the bottom of the lake.

Scientists looked for markers of a volcanic eruption, such as sulfur and chloride in the lake. They also installed seismometers around the body of water to record tiny earthquakes that would follow a volcanic eruption. "It was the quietest area that the British Geological Survey had ever monitored," says Evans. The volcano hypothesis died. CO2 was bubbling into the lake from below.

Scientists reasoned that CO2 had been trapped in the bottom of Lake Nyos for a long time, held down by 682 feet (208 meters) of water. On the day of the eruption, however, something external triggered the release of gas. Most likely, it was a rockslide from one of the lake's walls. When the falling rocks sunk to the bottom of the lake, they pushed up some gas. Then most of the gas bubbled up.

­If this sounds like a freak occurrence to you, read on to learn about the lake that exploded in an eerily similar fashion just two years before.