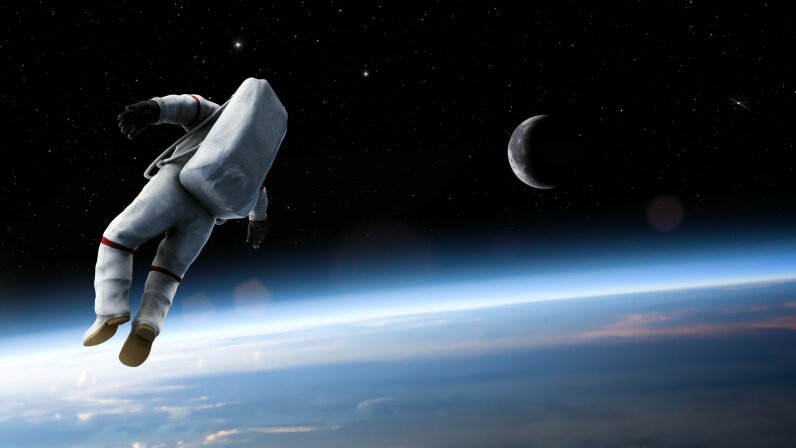 Gravity keeps the moon where it's supposed to be -- in orbit. Peepo / Getty Images

Every time you jump, you experience gravity. It pulls you back down to the ground. Without gravity, you'd float off into the atmosphere -- along with all of the other matter on Earth.

You see gravity at work any time you drop a book, step on a scale or toss a ball up into the air. It's such a constant presence in our lives, we seldom marvel at the mystery of it -- but even with several well-received theories out there attempting to explain why a book falls to the ground (and at the same rate as a pebble or a couch, at that), they're still just theories. The mystery of gravity's pull is pretty much intact.

As for the science behind the action, we know that Isaac Newton defined gravity as a force -- one that attracts all objects to all other objects. We know that Albert Einstein said gravity is a result of the curvature of space-time. These two theories are the most common and widely held (if somewhat incomplete) explanations of gravity.

Although many people had already noted that gravity exists, Newton was the first to develop a cohesive explanation for gravity, so we'll start there.

Newton set forth the idea that gravity was a predictable force. His cumulative work earned him a monument at the Griffith Observatory (that's astronomer William Herschel on the left).
Stephen Dunn/Getty Images

In the 1600s, an English physicist and mathematician named Isaac Newton was sitting under an apple tree -- or so the legend tells us. Apparently, an apple fell on his head, and he started wondering why the apple was attracted to the ground in the first place.

Newton publicized his Theory of Universal Gravitation in the 1680s. It basically set forth the idea that gravity was a predictable force that acts on all matter in the universe, and is a function of both mass and distance. The theory states that each particle of matter attracts every other particle (for instance, the particles of "Earth" and the particles of "you") with a force that is directly proportional to the product of their masses and inversely proportional to the square of the distance between them.

The standard formula for the law of gravitation goes [source: UT]:

where G is the gravitational constant, m1 and m2 are the masses of the two objects for which you are calculating the force, and d is the distance between the centers of gravity of the two masses.

When you deal with massive bodies like the Earth, however, which has a mass of 6E+24 kilograms (see How much does planet Earth weigh?), it adds up to a rather powerful gravitational force. That's why you're not floating around in space right now.

The force of gravity acting on an object is also that object's weight. When you step on a scale, the scale reads how much gravity is acting on your body. The formula to determine weight is [source: Kurtus]:

For hundreds of years, Newton's theory of gravity pretty much stood alone in the scientific community. That changed in the early 1900s.

Albert Einstein called gravity a distortion in the shape of space-time.
Photo by Keystone/Getty Images

Albert Einstein, who won the Nobel Prize in Physics in 1921, contributed an alternate theory of gravity in the early 1900s. It was part of his famous General Theory of Relativity, and it offered a very different explanation from Newton's Law of Universal Gravitation. Einstein didn't believe gravity was a force at all; he said it was a distortion in the shape of space-time, otherwise known as "the fourth dimension" (see How Special Relativity Works to learn about space-time).

Basic physics states that if there are no external forces at work, an object will always travel in the straightest possible line. Accordingly, without an external force, two objects travelling along parallel paths will always remain parallel. They will never meet.

But the fact is, they do meet. Particles that start off on parallel paths sometimes end up colliding. Newton's theory says this can occur because of gravity, a force attracting those objects to one another or to a single, third object. Einstein also says this occurs due to gravity -- but in his theory, gravity is not a force. It's a curve in space-time.

Still more-recent theories of gravity express the phenomenon in terms of particles and waves. One view states that particles called gravitons cause objects to be attracted to one another. Gravitons have never actually been observed, though. And neither have gravitational waves, sometimes called gravitational radiation, which supposedly are generated when an object is accelerated by an external force [source: Scientific American].

Gravitons or no gravitons, we know that what goes up must come down. Perhaps someday, we'll know exactly why. But until then, we can be satisfied just knowing that planet Earth won't go hurtling into the sun anytime soon. Gravity is keeping it safely in orbit.

How Water Works
How Much Water Is There on Earth?
Divers Find Roman-era Sunken Treasure in Shipwreck Off Israel