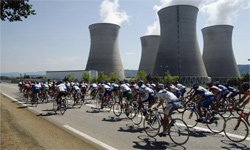 It's business as usual at this French nuclear facility as Tour de France riders whiz past on July 12, 2003.
Robert Laberge/Getty Images

Paluel's four reactors are situated in the Seine-Maritime County of Normandy, a region that prides itself in generating around 11 percent of France's electricity [source: Seine-Maritime Economic Development Agency]. Paluel alone contributed 6 percent of the country's electricity in 2010 [source: IAEA PRIS]. The four reactors at Paluel have been pumping out power since the early to mid-1980s and have produced a cumulative 847,053 gigawatt-hours of energy over their lives-- more than the amount of electricity the country of Germany used in 2008 [sources: IAEA PRIS, The World Bank].

Paluel generates more than electricity, however. The power plant has made a significant economic impact in the region; contracts between Paluel and local businesses amounted to more than $64.6 million in 2005 [source: Seine-Maritime Economic Development Agency]. What's more, the Paluel and Penly nuclear power plants are actively involved in agricultural recycling experiments in the Seine-Maritime County. For example, since 2003, sludge from the wastewater treatment plants at Paluel has been used to generate compost for reed beds and Penly provides algae to companies who use it for recycling into fertilizer.

Next up is Europe's second largest nuclear power plant, and it celebrated a historic milestone recently.