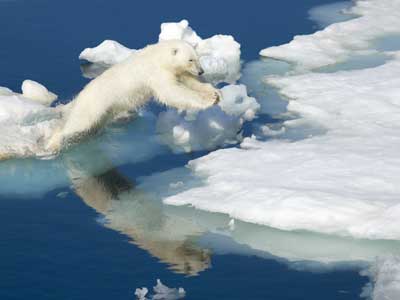 For the first time in recorded history, ships can now circumnavigate the frozen Arctic. In a little more than a century, humans have managed to burn enough fossil fuels to raise greenhouse gases and, in turn, elevate global temperatures. As Arctic ice melts, more areas open up for possible exploration and oil production.

According to a recent United States Geological Survey, as much as one-fifth of the planet's undiscovered petroleum reserves may reside in the Arctic. That's roughly 90 billion barrels of oil and 1,670 trillion cubic feet of natural gas [source: New York Times]. Who owns all these potential resources? Well, it's not as straightforward as you might think.

Under the 17th century Freedom of the Seas doctrine, the Arctic belonged to no one, but under the United Nations' Law of the Sea treaty, Canada, Denmark, Norway, Russia and the United States all have a legal claim to valuable seafloor territory. The treaty gives countries exclusive economic rights to the 200 nautical miles extending from their coastlines. This lands large portions of the Arctic's petroleum riches firmly in U.S. and Russian hands.

However, the U.N. treaty also allows Canada, Denmark, Norway, Russia and the United States to file claims for more territory if they can prove their continental shelves extended into the Arctic seabed. As a result, the five contenders for northern oil riches have all launched vigorous campaigns to survey the ocean floor. By this, they hope to convince the U.N. to give them as big a slice of the Arctic oil pie as possible.

In particular, a great deal of controversy surrounds the Lomonosov Ridge, which crosses the Arctic between Greenland and Russia. Russia claims the area is an extension of the Asian continental shelf, while Canada and Denmark argue it's an extension of North America. In August of 2007, a Russian expedition boldly planted a flag on the seafloor beneath the North Pole -- a region Russia could legally own if the U.N. sides with its claims. Russia's Institute of Ocean Geology plans to present its full findings in 2010. Until then, the region will continue to be a contested space.

­Feel le­ft out of the race to plunder Arctic oil? Don't worry. There's another thawing, frozen wilderness to drool over on the other end of the globe.