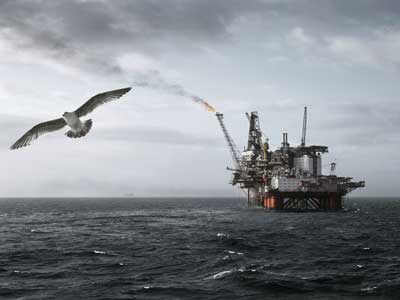 Oil rigs currently can reach about 10,000 feet (3,048 meters) into the ocean. To what depths will future platforms sink?
Jan Stromme/Stone/Getty Images

The first offshore drilling platform was constructed in 1897 at the end of a wharf. In less than a century, oil rigs evolved to operate in waters beyond sight of land and plunge to depths that 19th-century man had only dared to dream of. Today, technology continues to improve, but so many potential oil riches rest well beyond human grasp.

Currently, deep-sea spar platforms can reach down through 10,000 feet (3,048 meters) and Transocean drill ships are capable of reaching depths of 12,000 feet (3,658 meters) [source: USA Today]. To put that in perspective, the deepest surveyed point in Earth's oceans is Challenger Deep. At 35,840 feet (10,924 meters) below sea level, this portion of the Pacific Mariana Trench is more than a mile (1.6 km) deeper than Mount Everest is tall.

Even at depths of 10,000 feet or less, deep-sea drilling presents a host of problems. Cut off from the sun, these waters reach nearly freezing temperatures, contain pressures great enough to crack iron casings and are subject to rough, deep-sea currents. Engineers have to design equipment that can stand up to these conditions, as well as those presented by the oil itself.

Drill down thousands of feet below the ocean floor, and you'll encounter 400-degree F (204-degree C) petroleum reservoirs at pressures as high as 20,000 pounds per square inch [source: USA Today]. When this hot surge hits the sudden temperature change of a seafloor environment, it can cool to solid form in seconds, rupturing pipes in the process. While antifreeze has played an important part in preventing this ­so far, more advanced methods are under development [source: Wired].

Regardless of the challenges involved, these ultra-deepwater fields contain the kind of riches petroleum companies would love to claim. One particularly popular area is the Lower Tertiary in the Gulf of Mexico, where geologists have detected potentially lucrative drill sites at depths of 15,000 to 30,000 feet (4,572 to 9,144 meters). Chevron's Tahiti field in this region contains an estimated 400 to 500 million barrels of oil [source: USA Today]. The entire Lower Tertiary region may hold as much as 15 billion barrels total [source: Wired].

­Explore the links below to learn more about offshore drilling and our growing appetite for sweet, sweet crude.