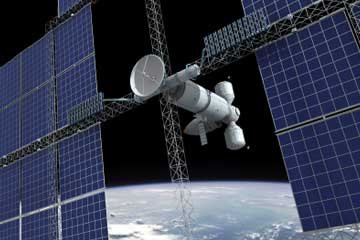 Solar cells have long been a mainstay on satellites; where will they end up in the future?
©iStockphoto.com/iLexx

We've talked a lot about how a typical PV system operates, but issues concerning cost-effectiveness (which we'll get into more on the next page) have spurred endless research efforts aimed at developing and fine-tuning new ways to make solar power increasingly competitive with traditional energy sources.

For example, single-crystal silicon isn't the only material used in PV cells. Polycrystalline silicon is used in an attempt to cut man­ufacturing costs, although the resulting cells aren't as efficient as single crystal silicon. Second-generation solar cell technology consists of what's known as thin-film solar cells. While they also tend to sacrifice some efficiency, they're simpler and cheaper to produce -- and they become more efficient all the time. Thin-film solar cells can be made from a variety of materials, including amorphous silicon (which has no crystalline structure), gallium arsenide, copper indium diselenide and cadmium telluride.

Another strategy for increasing efficiency is to use two or more layers of different materials with different band gaps. Remember that depending on the substance, photons of varying energies are absorbed. So by stacking higher band gap material on the surface to absorb high-energy photons (while allowing lower-energy photons to be absorbed by the lower band gap material beneath), much higher efficiencies can result. Such cells, called multi-junction cells, can have more than one electric field.

Concentrating photovoltaic technology is another promising field of development. Instead of simply collecting and converting a portion of whatever sunlight just happens to shine down and be converted into electricity, concentrating PV systems use the addition of optical equipment like lenses and mirrors to focus greater amounts of solar energy onto highly efficient solar cells. Although these systems are generally pricier to manufacture, they have a number of advantages over conventional solar panel setups and encourage further research and development efforts.

All these different versions of solar cell technology have companies dreaming up applications and products that run the gamut, from solar powered planes and space-based power stations to more everyday items like PV-powered curtains, clothes and laptop cases. Not even the miniature world of nanoparticles is being left out, and researchers are even exploring the potential for organically produced solar cells.

But if photovoltaics are such a wonderful source of free energy, then why doesn't the whole world run on solar power?