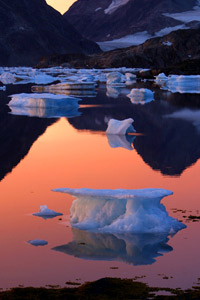 An iceberg floats in the bay of Kulusuk, Greenland. The northern ice caps and glaciers are melting.
AP Photo/John McConnico/File

By the time Al Gore's award-winning documentary "An Inconvenient Truth" hit theaters in 2006, most of the world had accepted the fact of global warming, if not humanity's causative role in it. But over the last few years, as more and more scientific organizations have backed up the claim that human activity is to blame for rising temperatures, including a United Nations science panel in 2007, government actions attempting to curtail greenhouse-gas emissions have gained even more supporters. Most of the developed world is now onboard in the fight to save the world from warm, certain doom -- but suddenly, it appears all the effort might be futile.

The situation is indeed dire. As factories, cars and power plants emit tons of gases like carbon dioxide, methane and nitrous oxides into the atmosphere, and all the while deforestation activities remove the plant life that absorbs carbon dioxide, lots of those "greenhouse gases" build up in the atmosphere. There, they act like the glass of a greenhouse, allowing sunlight in but trapping it once it's there.

So far, in the last century, Earth's average temperature has increased about 1 degree F (0.6 degrees C) [source: New York Times]. That may not seem like much, but it can have profound effects, like altering weather systems and changing the balance of sea life. Polar bears are looking at possible extinction in the next few decades [source: NGN]. Experts predict that by 2100, sea levels could rise by up to 2 feet (61 centimeters), leaving major coastal areas underwater [source: New York Times].

Most scientists say that an increase of more than 3.3 degrees F (2 degrees C) would be catastrophic [source: SFS].

The world is taking action to curb the danger, like setting limits on industrial CO2 pollution and developing alternative energy sources. But some new research could throw a wrench in the works of ecological optimism: It seems all our efforts may be for naught.

In this article, we'll look at some newer research suggesting that global warming might be irreversible. We'll find out why we may not be able to undo the damage and see if we might as well just emit to our hearts' content.

We'll start with the "why": As it turns out, Earth's bodies of water do not make for quick change.