An Irreversible State of Global Warming: The Cycle 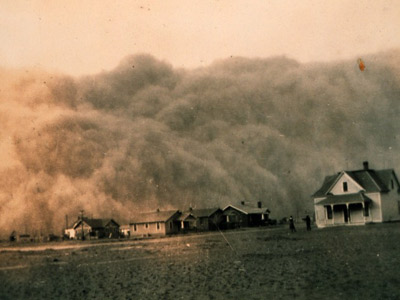 Carbon dioxide levels at 450 ppm could result in widespread drought and famine comparable to the Dust Bowl of the 1930s in the United States.
Image courtesy of NASA

A study published in 2009, led by a scientist with the National Oceanic and Atmospheric Administration, shows that climate change may in fact be irreversible. Instead of it taking a couple hundred years to reverse global warming if we cut emissions right now, it looks like it could take more like a millennium. The issue is the oceans' absorption of atmospheric carbon dioxide.

The world's oceans play a central role in climate control. It's not just plants that absorb CO2; oceans absorb even more of it. Ocean waters absorb CO2 from the air, effectively cooling the atmosphere. The ocean also emits heat from the sunlight it absorbs, warming the atmosphere. This constant cycle of cooling and warming keeps the Earth at a stable temperature. Or at least, that's how it's supposed to work.

The system starts to break down when the amount of CO2 pumped into the atmosphere rises exponentially, as it has in the last couple of centuries. The ocean can only absorb so much CO2 in a period of time: The upper layers of water absorb CO2, and then, as currents move, lower layers of water replace those saturated surface waters, offering new absorption surfaces. The snail-like turnover pace means any actions we take now to curb CO2 emissions won't have any effect for a long, long time.

There are other cycles involved in the problem, too. The loss of sea ice in the Arctic due to global warming creates further warming conditions that are difficult to undo. Sea ice and glacial mass are another big part of the Earth's climate-control system. While water absorbs sunlight, ice reflects it. Glaciers help keep ocean waters at a stable temperature. When glaciers melt, as they've been doing steadily since the United States started recording their levels in 1978, there's less ice to reflect sunlight and more water to absorb it. With more sunlight absorption, ocean temperatures increase. When ocean temperatures increase, more heat is released into the atmosphere, and overall temperatures increase, leading to more melting.

The end result of these combined cycles could be what some experts are calling an irreversible state of global warming. But are we really at that tipping point where there's no turning back climate change?