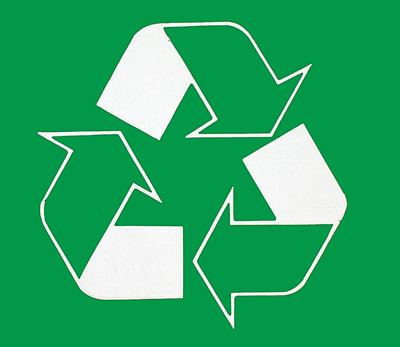 Look for this logo to see if a product is recycled or for a recycling center.
Photo courtesy stock.xchng

Recycling is gaining increased acceptance worldwide, but not everyone agrees that it's the best way to deal with the environmental problems of garbage. There are several criticisms of recycling.

The process of recycling an old product into something reusable uses energy and creates pollution. Critics claim that recycling is simply a zero-sum game, where the pollutants and waste from making new goods shift into the recycling industry. For some types of recycling, this may be true -- the trade-off between new products and some forms of recycled plastic, for example, are questionable. Nevertheless, there are at least as many ways to recycle that offer clear benefits in terms of energy used, natural resources consumed, pollutants released and landfill space used.

There Isn't Really a Garbage Problem

Some claim that there's no "garbage crisis." They say there's plenty of landfill space -- landfills are a safe and simple way to store as much garbage as we need to put there [source: ECOWorld]. It's true that there's technically plenty of space in the United States and other countries in which to store our garbage, but the thought of filling valleys and fields with garbage doesn't appeal to many people, and certainly not those who live near those valleys and fields.

Recycling Gives Us a False Sense of Security

This criticism closely ties to the problem of recycling causing its own environmental impact. Because of this impact, recycling only represents a minor improvement over landfills or incineration of garbage. Yet, it makes people feel like they've accomplished something important in protecting the environment. Recycling can also enable an attitude of entitled consumerism -- people feel that it's OK to purchase and use environmentally harmful products like bottled water or plastic diapers because they make up for it by recycling. These views point to the ultimate solution: buy less stuff. Purchasing reusable goods or simply buying fewer things we don't need is the best way to stop the garbage stream at the source.

For more information on recycling and related topics, check out the links below.