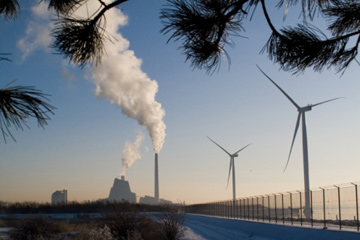 Carbon capture and recycling could help us reverse the global warming trend.
Hemera/Thinkstock

Reducing the amount of carbon in the atmosphere is an important part of reversing the global warming trend. Nature has an elegant solution. Plants take in water and carbon dioxide from the atmosphere and through photosynthesis convert it into oxygen and organic compounds. Could we mimic nature and pull carbon from the air?

In 2008, the National Science Foundation sponsored a workshop at which scientists discussed the possibility of capturing and recycling carbon. It's a lofty goal. If we could capture the carbon in the atmosphere and convert it into a fuel source, we could create a looped system. Instead of mining the Earth for fuel, we could pull it from the air. Burning the fuel would release the carbon back into the atmosphere as carbon dioxide. But then we'd just capture and convert it again.

If you apply critical thinking to this approach, you'll see that there are several challenges we face to make it a reality. We need a way to capture carbon from the atmosphere. We need a way to convert it into fuel. And we need a way to power the capture and conversion process that doesn't require us to mine more carbon-based fuels or we'll simply add to the existing greenhouse gas emissions.

To capture carbon from the atmosphere, we need to design absorbants. These materials do just what you'd think -- they absorb a particular material like a sponge. The workshop scientists concluded that the best place to start capturing carbon is from point sources -- concentrated streams of carbon dioxide from things like geothermal wells or power plants. We need to develop the technology to separate carbon dioxide from other gases for collection.

But that doesn't address more than half of the carbon dioxide we humans produce. We produce more carbon dioxide from our homes, vehicles and businesses than we do from factories or wells [source: Prakash, et al.]. But because we don't produce carbon dioxide in a steady stream, like some point sources do, it's harder to capture. The carbon dioxide concentration in the atmosphere is about 385 parts per million -- it's so diffuse that it's difficult to capture.

Assuming that scientists are able to develop the technology to capture carbon dioxide, the next step is to convert it into something else like methanol or dimethyl ether. This is also challenging because carbon dioxide is a very stable molecule -- it resists change. To convert it into something else requires energy. Nature uses the power of the sun. We would need to use a renewable energy source to avoid adding more carbon to the atmosphere.

Just as we need better technology to capture carbon dioxide, we need to develop efficient ways to convert it into something useful. If the capture or conversion process is too expensive or inefficient, it won't make sense to support it. The workshop scientists pointed out that our current fuel infrastructure would support fuel developed from captured carbon. That gives their proposal an advantage over alternative fuels like hydrogen, which would require a new infrastructure to be effective.

Now let's take a look at some solutions that sound more like science fiction than science fact.