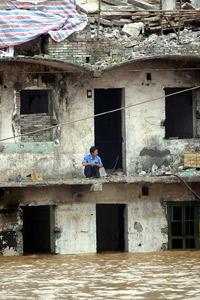 ­Environmental experts cite not one, but several potential catastrophes that could occur in the wake of the dam's construction.

Pollution. As it fills, the enormous reservoir will submerge 13 cities, 140 towns and 1,350 villages [source: International Rivers]. Homes, factories, mines and waste dumps will all end up underwater, along with their contents, which likely include toxic chemicals. Add to that the estimated 1.35 billion tons (1.25 billion metric tons) of sewage already being dumped in the river each year, which will have nowhere to go but into the reservoir -- a major source of drinking water for the region [source: China Three Gorges Project]. Putting a dam on the Yangtze will slow its flow from 13 feet (4 meters) per second to 1 foot (0.3 meters) per second, which means pollutants will float lazily in the river instead of being flushed quickly out to sea [source: Kuhn]. In a country where more than half of the major waterways are polluted to the point of being unsafe for drinking, polluted water is a big concern.

Earthquakes. Three Gorges Dam sits on two major fault lines -- Jiuwanxi and Zigui-Badong. Geologists fear that rapid changes in water pressure when the reservoir levels are changed during flood season could activate already shaky ground and trigger an earthquake (a phenomenon known as reservoir-induced seismicity). In the seven months following the 2006 increase in water level, geologists recorded 822 tremors around the reservoir [source: Hvistendahl].

Landslides and mudslides. The raising and lowering of the water level in the reservoir also destabilizes the land around it. Water seeps into the soil in the cliffs surrounding the reservoir, causing enough erosion to make the ground slip. The shore of Three Gorges reservoir has already collapsed in more than 90 places [source: Macartney]. Villagers in the area have reported mudslides and cracks appearing in their backyards. In 2003, 700 million cubic feet (20 million cubic meters) of rock slid into the Qinggan River just a couple of miles from where it flows into the Yangtze. The rockslide spawned 65-foot (20-meter) waves that killed 14 people [source: Hvistendahl].

Changes in the weather. The alteration in water flow from the dam is so significant that scientists are saying it's actually changing the weather in the area. Researchers at NASA discovered that Three Gorges was creating a sort of lake effect, decreasing rainfall in the area around it, while increasing rainfall in the surrounding mountains. In areas where rainfall increased, temperatures dropped by an average of 1.2 degrees Fahrenheit (less than 1 degree Celsius) because cloud cover limited the amount of sunlight reaching the ground. NASA scientists say these temperature fluctuations could become even more dramatic when the dam becomes fully functional in 2009 [source: NASA].

Drought. Ironically, just as the Three Gorges project seeks to prevent flooding, it's causing drought by reducing water levels in the Yangtze River. In 2008, the China Daily newspaper reported that the river had hit its lowest level in 142 years [source: Reuters]. That precipitous drop in water level strand­ed ships and led to water shortages in central and eastern China, including in Shanghai, China's largest city.

Lost species. The dam will flood some animal and plant habitats, while leaving others high and dry. Pollution in the water will make it impossible for many fish to survive. Three Gorges threatens more than 400 plant species, including the Chinese dove tree and dawn redwood, as well as a number of fish and the rare Baiji dolphin.

­Historic relics. The reservoir will inundate ancient villages, temples and burial grounds, destroying thousands of years' worth of irreplaceable history. Archaeologists and historians say almost 1,300 important historical sites will be submerged, including the 4,000-year-old homeland of the ancient Ba people [source: Kennedy].