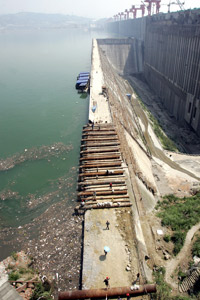 Trash washes against the side of the giant Three Gorges Dam. The river's pollution is putting the drinking water of Shanghai and many other cities at risk.
Goh Chai Hin/AFP/Getty Images

Human rights activists, scientists and environmentalists have been voicing serious concerns about Three Gorges since plans were approved in the early 1990s. Even Chinese Premier Zhu Rongji issued a dire warning when he toured the dam site in 1999, saying, "The responsibility on your shoulders is heavier than a mountain. Any carelessness or negligence will bring disaster to our future generations and cause irretrievable losses" [source: Kennedy]. Chinese journalist Dai Qing has been one of the most outspoken critics of Three Gorges. She once called the project "The most environmentally and socially destructive project in the world" [source: Kennedy]. In 1989, Qing spent 10 months in prison for her views.

For many years the Chinese government hailed the virtues of the project and downplayed any harm it might cause. Then, in a September 2007 meeting in the city of Wuhan, the government's tune seemed to change. Officials warned of the project's "hidden dangers," and said it had the potential to cause a "huge disaster […] if steps are not taken promptly" [source: Yang].

The Chinese government is taking steps -- to the tune of billions of dollars -- to make the dam and reservoir safer. It's spending $3.2 billion on water treatment projects, and another $1.6 billion on fortifying the reservoir banks to prevent landslides [sources: China Environmental News Digest and International Rivers]. It's finding new spawning areas for threatened fish species, and it moved many ancient relics before they ended up underwater.

­However, despite serious concerns about its safety, the Three Gorges Dam project continues. Not only is it proceeding, but there are also plans under way to create 12 more hydropower facilities on the middle and upper Yangtze. The Chinese government is also looking to replicate the Three Gorges model elsewhere, with 13 dams planned for the Nu River and eight dams on the Lancang (Upper Mekong) River, all in an effort to increase the country's hydropower capacity to 300 gigawatts (300 million kilowatts) by 2020 [source: Yardley]. These dams could potentially displace thousands more people, and cause ecological nightmares of their own.

­To learn more about dams and China, look over the next page.

The Three Gorges Dam will have a huge impact not only on the land surrounding it, but also on the people who live there. Before construction began, the Chinese government ordered 1.3 million people living along the banks of the Yangtze to leave their homes. Although those who were relocated were promised money and plots of land, some received as little as 50 yuan -- just $7 -- a month, and were resettled to areas where the soil was less fertile than the land they had left [source: Hvistendahl]. Many farmers moved to higher ground, where they're now sharing tiny pieces of land on steep, landslide-prone slopes.