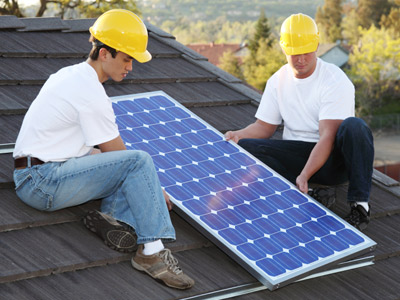 Because of what it pumps back into the system, a zero-energy home ends up consuming no energy at all. See more green science pictures.
iStockphoto.com/gchutka

When it comes to energy use, not all homes are created equal.

First, there's the traditional electric house. A typical, all-electrically powered home in the United States uses about 10 kilowatt-hours (kWh) per square foot per month, or about 120 kWh per square foot in a year [source: ToolBase].

A higher-efficiency home, such as one with a solar water heater, a small photovoltaic system and high-efficiency appliances, brings the energy use down to about 84 kWh per square foot in a year [source: ToolBase].

And then there's the zero-energy home, or ZEH. At the end of that same year, a ZEH ends up consuming no energy at all.

Well, actually, it's a bit more complicated than that, but it does work out to a net-zero energy consumption. A zero-energy home is about as efficient as a house can get without giving up electricity altogether. It has all the comforts of a regular house -- it heats, cools, entertains, washes and dries. It just does it all more efficiently. And then, when it's done, it generates enough solar electricity to cover its own low-energy needs.

It seems pretty futuristic, but zero-energy homes aren't just a concept anymore. In the United States, they're starting to pop up for sale in the sunniest states, like Arizona, Texas and California, where solar fuel is most abundant. There are even some home-construction companies that focus almost exclusively on the ZEH or near-ZEH market.

In this article, we'll find out what these homes are all about -- how they use 60 percent less energy than a typical home, how they end up with a net-zero energy consumption, and whether they end up saving a homeowner money in the long run, or if the benefit is purely environmental.

Building a zero-energy home isn't simply a matter of throwing in a solar-power system and the highest-efficiency refrigerator on the market. A ZEH is built from the ground up with energy efficiency in mind. It starts with the most basic design and construction elements, focusing on two major areas: reducing energy requirements for the systems that account for most of a home's energy use and increasing the home's built-in energy-generating capacity.

And it minimizes energy needs for:

There are lots of tricks builders and architects use to accomplish these goals. For instance, the walls, roof and foundation, and the interaction between the three, can be designed to most efficiently manage water, vapor and heat flow. The roof coating may have a high solar-reflectance value. Eaves and awnings can be strategically placed and sized to block summer sun and allow winter sun. Other design elements may include:

Even with the highest-efficiency design and appliances, a ZEH still uses power, and it's still connected to the electrical grid. So how can it be "zero energy?" That has to do with the installed solar photovoltaic system. The solar panels sometimes provide as much energy as the home uses. And when they don't, they have a payback plan. 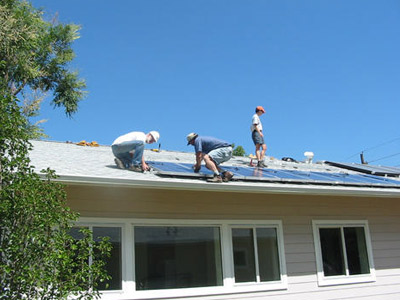 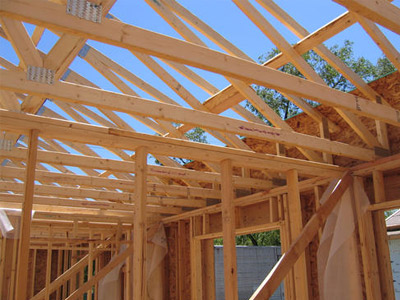 The double stud framing of a Habitat for Humanity ZEH in Colorado allows for energy efficiency.
Photo courtesy of NREL

Cutting down on carbon emissions is a big deal. The polar bears can attest to that. So can drought-ridden villages in rural areas around the globe. But there are other concerns, too. First, there's the money factor.

Regardless of price range, building a zero-energy home does cost more than building a traditional home of the same size and features. Estimates put the increase at anywhere from 20 percent to 60 percent [sources: ToolBase, Oliver]. It's a pretty big increase, but that can go down considerably when you factor in any available federal and state energy-efficiency rebates.

And then there's the whole $0 energy bill thing. A regular single-family home in the United States pays about $2,200 a year on power [source: EnergyStar]. Reducing that to nothing can save $22,000 over 10 years. If you factor in those government incentives, energy-savings might be able to make up for an increase in purchase price.

There's a wrinkle in the energy-savings estimate, though. A ZEH is only ZE if the people who live in it practice good energy habits. If the homeowners leave the lights on all the time, run the AC at 60 degrees F (16 degrees C) in summer and take daily 30 minute showers, the actual energy use of the home is probably going to exceed its generating capacity. In that case, the energy bill is going to be greater than zero.

In the end, the true energy-efficiency of a zero-energy home depends a lot on the people maintaining it. PV systems require regular checkups to work at their maximum efficiency. Even the highest efficiency air-conditioning setup is going to have to work overtime if people leave the door open in the middle of summer. But if the home is used as prescribed, it could potentially work out to provide substantial benefits -- both to homeowners and to polar bears.

For more information on zero-energy homes and related topics, look over the links on the next page.