Meeting the Needs of Future Warfare 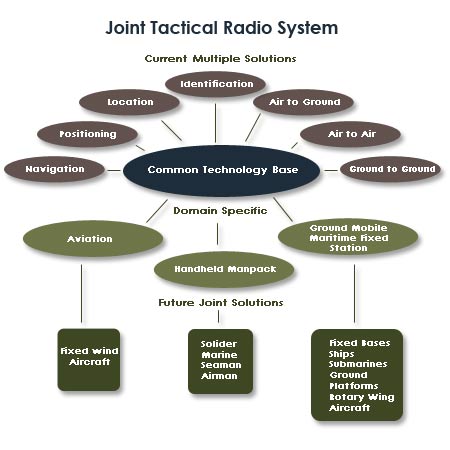 The network is the core of Future Combat Systems. It will allow each unit to share real-time information with other units, coordinate movement and react to battlefield conditions quickly and accurately. Network-centric warfare is a relatively new concept that unifies all of the advantages gained by other elements of FCS. For example, a tank platoon that can be deployed quickly and move with agility has no advantage if their orders are delayed or unclear, or if their commanders don't have enough information to make the right decision in the shortest amount of time. The network will allow for speed of command.

Network-centric warfare changes the way commanders look at their armies. Instead of a contest of numbers (my 3,000 troops can beat your 1,000 troops), the U.S. Army becomes one entity with many parts that can shift and adapt to quickly-developing situations. Information is shared across the entire network.

The network comprises several components. The Joint Tactical Radio System (JTRS, often referred to as "Jitters"), was designed to do away with the need for multiple bulky radio systems using various frequencies and encryption methods. It would allow all branches of the U.S. military to communicate with each other from land, sea and air using the same system. However, critics found the JTRS plan of replacing older analog radios (many of which aren't very old at all, having just been purchased for operations in the Middle East) overly ambitious and almost impossible to implement. Today, JTRS is still in development as a supplemental communications program that will act as a soldier's "gateway" to the overall FCS network [ref].

The System-of-Systems Common Operating Environment (SOSCOE) is software that will allow all of the various systems to operate seamlessly. It will take roughly 35 million lines of code to properly program SOSCOE [ref]. The operating system is a blend of Linux and an Intel-based OS specially created for the Army.

The WIN-T system is the data transport system that will connect the FCS systems. WIN-T will utilize lasers, satellites and more conventional ground networks. The WIN-T system is basically a tactical Internet, keeping fast-moving units in communication with operational leadership. Not only does WIN-T have to provide the massive amount of bandwidth to carry all of the information FCS will be generating, but it must also be strong enough to deal with the battlefield environment [ref].

The need for tactical agility has led the Army to focus design efforts on lighter, faster combat vehicles. Today's main battle tank, the M1 Abrams, weighs 65 to 70 tons, depending on its configuration. Its front armor is capable of stopping just about any anti-tank round in existence. However, next-generation ballistic weapons will strike with immense force. Instead of layering a tank with more armor, creating a heavier, slower vehicle, the Army has opted for a 20-ton design. These future tanks will use ultra-modern technologies (some of which don't actually exist yet) to resist anti-tank weapons.

New armor materials are one part of the plan, but the tanks will also have a small signature - its small size will make it tougher to find and hit. An active suspension system will allow the tank to "crouch" into a very low position. The Army will also employ active countermeasures like smoke screens to obscure line of sight and small rocket rounds that can intercept incoming rounds from enemies.

The M1 tank weighs 65 to 70 tons and has front armor that can stop most anti-tank rounds. However, the Army hopes to create a much lighter, smaller tank that can evade enemies without the need for heavy armor.
Image courtesy U.S. Department of Defense

According to a press release, "The Army transformation requirements includes the ability to put a combat-capable brigade anywhere in the world within 96 hours, a full division in 120 hours, and five divisions on the ground within 30 days" [ref]. One way to increase strategic agility is to allow fewer soldiers to do more work. This continues a trend that has gone on for centuries. At the Battle of Gettysburg, the Union line was a few miles long and covered by roughly six corps. The average tourist can walk the length of the line in one afternoon. During the Cold War, roughly the same number of NATO troops (and corps) covered the entire inter-German border - a distance that you certainly could not walk in an afternoon [ref].

FCS will allow for even greater dispersion of forces by utilizing unmanned vehicles, unmanned weapons platforms and robot sentries. Manned vehicles will require smaller crews - the FCS tank will have a crew of just two, compared to the M1's crew of four.

The Army wants to reduce the amount of fuel needed by its units by as much as 30 percent. For example, the gas turbine engine that powers the M1 Abrams gives it enormous power and the ability to travel close to 45 mph, but it also uses an incredible amount of fuel. Vehicles and tanks developed for FCS will likely use some form of electric-hybrid engine, increasing both available torque and fuel efficiency.

In the next section we'll learn more about these vehicles and the other vehicles planned for FCS.