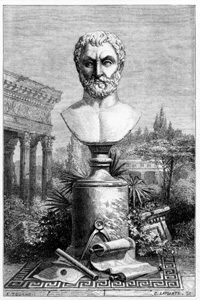 Sorry, Thales of Miletus. Despite being one of the seven wise men of Greece, you don't receive the honor of being dubbed "first scientist." See more Greek philosopher pictures.
Hulton Archive/Getty Images

The word "scientist" entered the English language in 1834. That's when Cambridge University historian and philosopher William Whewell coined the term to describe someone who studies the structure and behavior of the physical and natural world through observation and experiment. You could make the argument, then, that the first modern scientist was someone like Charles Darwin or Michael Faraday, two iconic figures who also happened to be Whewell's contemporaries. But even if the term didn't exist before the 1830s, people who embodied its principles did.

To find the very first scientist, we must travel back in time even further. We could go back to the most ancient of the ancient Greeks, all the way back to Thales of Miletus, who lived from about 624 B.C. to about 545 B.C. By many accounts, Thales achieved much in both science and mathematics, yet he left no written record and may have been, like Homer, a celebrated figure who received credit for many great achievements but who may never have existed at all.

We could consider other ancient Greeks as well, such as Euclid (the father of geometry) or Ptolemy (the misguided astronomer who put Earth at the center of the cosmos). But all of these men, although great thinkers, relied on making arguments instead of running experiments to prove or disprove hypotheses.

Some scholars believe that modern science had its origins in an impressive class of Arabic mathematicians and philosophers working in the Middle East decades before the European Renaissance began. This group included al-Khwarizmi, Ibn Sina, al-Biruni and Ibn al-Haytham. In fact, many experts recognize Ibn al-Haytham, who lived in present-day Iraq between 965 and 1039 A.D., as the first scientist. He invented the pinhole camera, discovered the laws of refraction and studied a number of natural phenomena, such as rainbows and eclipses. And yet it remains unclear whether his scientific method was truly modern or more like Ptolemy and his Greek predecessors. It's also not clear whether he had emerged from the mysticism still prevalent at the time.

It's almost impossible to determine when the influence of mysticism had faded completely among scientists. What's easier to identify are the characteristics of a modern scientist. According to author Brian Clegg, a modern scientist must recognize the importance of experiment, embrace mathematics as a fundamental tool, consider information without bias and understand the need to communicate. In other words, he or she must be unshackled by religious dogma and willing to observe, react and think objectively. Clearly, many individuals doing scientific work in the 17th century -- Christiaan Huygens, Robert Hooke, Isaac Newton -- satisfied most of these requirements. But to find the first scientist with these characteristics, you have to travel to the Renaissance, to the mid-16th century.

We'll head there next.

You probably think of Galileo Galilei at the mention of Renaissance science, and rightfully so. He overturned Aristotle's ideas on motion and began to explain such complex concepts as force, inertia and acceleration. He built one of the first telescopes and used it to study the cosmos. What he saw through the lenses of his device removed Earth from the center of the universe and put it in its proper place. In all his work, Galileo stressed the need for observation and experimentation. And yet Galileo owes much to another seminal figure born 20 years earlier.

His name was William Gilbert, a rather obscure figure in the history of science. Along with Galileo, Gilbert had been busy practicing the scientific method in his work and setting an example for his peers after the first decade of the 17th century had past. Here's what John Gribbin had to say about Gilbert and Galileo in his 2002 book "The Scientists":

Although Galileo is one of the towering figures in science, known by name to every educated person today, and Gilbert is less well known than he deserves, Gilbert had the earlier birth date and, chronologically speaking at least, deserves the title of first scientist.

Gilbert was born in 1544 to a prominent local family and attended Cambridge University between 1558 and 1569. Eventually, he settled in London and embarked on a successful career as a physician, attending to both Queen Elizabeth I and, upon her death in 1603, to King James I.

It was Gilbert's investigations into the nature of magnetism, however, that may make him the first modern scientist. This work culminated in "De Magnete, Magneticisque Corporibus, et de Magno Magnete Tellure" ("On the Magnet, Magnetic Bodies, and the Great Magnet of the Earth"), the first significant book about physical science published in England. In the book's preface, Gilbert described the need for "sure experiments and demonstrated arguments" instead of "conjectures and the opinions of philosophical speculators." He also discussed the need to conduct experiments "carefully, skilfully and deftly, not heedlessly and bunglingly."

The scientist followed his own advice. Gilbert's book recounted his investigations in so much detail that another person could replicate his work and verify his results. This research led to many important discoveries about magnetism. The learned fellow also turned his inquisitive mind to the heavens.

Gilbert directly influenced Galileo. The famous Italian scientist read De Magnete and repeated many of its experiments. It's easy to imagine Galileo poring over the book and nodding in affirmation at Gilbert's ideas about experimentation and observation -- ideas that Galileo himself would apply in his groundbreaking work. Is it any wonder Galileo proclaimed Gilbert to be the founder of the scientific method? This endorsement alone may be enough to substantiate the claim that William Gilbert was the first modern scientist.

Many science books identify Francis Bacon as the father of the scientific method. Doesn't that make him the first scientist? It depends. Bacon certainly popularized the methods and techniques of scientific inquiry, but he was more of a philosopher than an experimenter. William Gilbert and Galileo, by contrast, were hands-on scientists. They designed experiments, carried them out and recorded their results -- just like you did in your high school physics class. This commitment to conducting rigorous, repeatable experiments is one of the hallmarks of modern science.