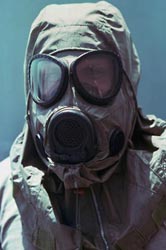 Any time there is a threat of biological or che­mical attack, the first thing you hear about is gas masks.

Gas masks -- more generically known as respirators -- are also an important part of industrial safety on a daily basis. They protect workers against everything from flour dust in a grain elevator to the damaging organic chemicals in paint spray.

In this edition of HowStuffWorks, we will look at the technology behind gas masks so you can understand how they work, and when they won't. ­ 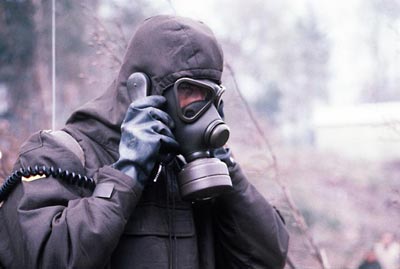 A typical full-face air-purifying respirator, used here with a hood and suit for extra protection

When most people think about gas masks or respirators, what they usually envision is a tight-fitting plastic or rubber face mask with some sort of filter cartridge. The mask covers the nose and mouth. These are called half-mask air-purifying respirators. Depending on the chemical or biological agents in the environment, a half mask may not be sufficient because the eyes are very sensitive to chemicals and offer an easy entry point for bacteria. In this case, a full-face respirator is called for. It provides a clear face mask or clear eye pieces that protect the eyes as well.

The problem with air-purifying respirators is that any leak in the mask makes them ineffective. The leak could come from a poor fit between the mask and the user's face, or from a crack or hole somewhere on the mask.

Two other types of respirator systems solve the leak problem. The supplied-air respirator uses the same sort of filter cartridge found in an air-purifying respirator. However, instead of placing the filter directly on the mask and requiring the user's lungs to suck air through it, the filter attaches to a battery-operated canister. The canister uses a fan to force air through the filter, and then the purified air runs through a hose to the mask. The advantage is that the air coming into the mask has positive pressure. Any leak in the mask causes purified air from the canister to escape, rather than allowing contaminated air from the environment to enter. Obviously, positive pressure creates a much safer system, but it has two disadvantages:

However, for infants and children this may be the only option because their small faces make masks difficult to fit reliably.

The best system is called an SCBA (self-contained breathing apparatus) system. If you have ever seen a firefighter wearing a full-face mask with an air tank on his or her back, then you have seen an SCBA system. The air tank contains high-pressure purified air and is exactly like the tank used by a SCUBA diver. The tank provides constant positive pressure to the face mask. An SCBA provides the best protection, but has the following problems:

For firefighting, an SCBA system makes a lot of sense. The smoke is thick, dangerous and contains an unknown mix of poisonous gases. The fire may consume most or all of the oxygen in the air. The fire engine can carry extra tanks or refilling equipment, and a firefighter spends a limited time in the burning building. For civilians or for soldiers on the battlefield, however, an SCBA system is nearly impossible to manage because of the expense and the limited air time.

Because of the problems with SCBA systems, any respirator that you are likely to use will have a filter that purifies the air you breathe. How does the filter remove poisonous chemicals and deadly bacteria from the air?

Any air filter can use one (or more) of three different techniques to purify air:

Particle filtration is the simplest of the three. If you have ever held a cloth or handkerchief over your mouth to keep dust out of your lungs, you have created an improvised particulate filter. In a gas mask designed to guard against a biological threat, a very fine particulate filter is useful. An anthrax bacteria or spore might have a minimum size of one micron. Most biological particulate filters remove particle sizes as small as 0.3 microns. Any particulate filter eventually clogs, so you have to replace it as breathing becomes difficult.

A chemical threat needs a different approach, because chemicals come as mists or vapors that are largely immune to particulate filtration. The most common approach with any organic chemical (whether it be paint fumes or a nerve toxin like Sarin) is activated charcoal.

Charcoal is carbon. (See this Question of the Day for details on how charcoal is made.) Activated charcoal is charcoal that has been treated with oxygen to open up millions of tiny pores between the carbon atoms. According to Encyclopedia Britannica:

The use of special manufacturing techniques results in highly porous charcoals that have surface areas of 300-2,000 square metres per gram. These so-called active, or activated, charcoals are widely used to adsorb odorous or coloured substances from gases or liquids.

The word adsorb is important here. When a material adsorbs something, it attaches to it by chemical attraction. The huge surface area of activated charcoal gives it countless bonding sites. When certain chemicals pass next to the carbon surface, they attach to the surface and are trapped.

Activated charcoal is good at trapping carbon-based impurities ("organic" chemicals), as well as things like chlorine. Many other chemicals are not attracted to carbon at all -- sodium and nitrates, to name a couple -- so they pass right through. This means that an activated-charcoal filter will remove certain impurities while ignoring others. It also means that, once all of the bonding sites are filled, an activated charcoal filter stops working. At that point you must replace the filter.

Sometimes, the activated charcoal can be treated with other chemicals to improve its adsorption abilities for a specific toxin.

The third technique involves chemical reactions. For example, during chlorine gas attacks in World War I, armies used masks containing chemicals designed to react with and neutralize the chlorine.

In industrial respirators, you can choose from a variety of filters depending on the chemical that you need to eliminate. The different filters are color coded by NIOSH standards for things like acids and ammonia. See this page for details.