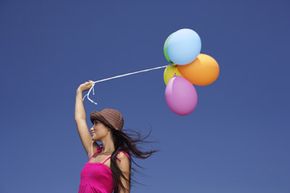 Why do ballons fly away when you let go of them? We've got the answer.
Stock4B/Getty Images

There is something incredibly neat about helium balloons! If you buy one at the circus or fair, you can hold its string and it will ride along above you. If you let go of the string, it will fly away until you can't see it anymore.

If you hav­e ever wondered why it flies away, then read on. In this edition of HowStuffWorks, you'll find out all about helium! 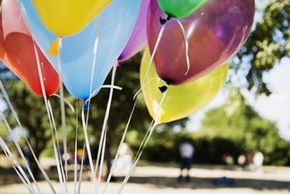 As long as the helium plus the balloon is lighter than the air it displaces, the balloon will float in the air.
ColorBlind Images/Getty Images

Let's say that y­ou take a plastic 1-liter soda bottle, empty out the soft drink it contains, put the cap back on it (so you have a sealed bottle full of air), tie a string around it like you would a balloon, and dive down to the bottom of the deep end of a swimming pool with it. Since the bottle is full of air, you can imagine it will have a strong desire to rise to the surface. You can sit on the bottom of the pool with it, holding the string, and it will act just like a helium balloon does in air. If you let go of the string the bottle will quickly rise to the surface of the water.

The reason that this soda bottle "balloon" wants to rise in the water is because water is a fluid and the 1-liter bottle is displacing one liter of that fluid. The bottle and the air in it weigh perhaps an ounce at most (1 liter of air weighs about a gram, and the bottle is very light as well). The liter of water it displaces, however, weights about 1,000 grams (2.2 pounds or so). Because the weight of the bottle and its air is less than the weight of the water it displaces, the bottle floats. This is the law of buoyancy. 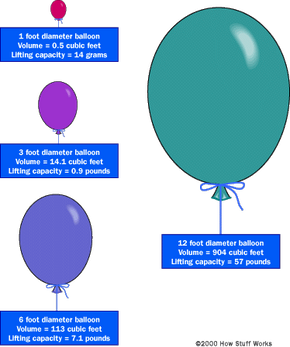 Helium balloons work by the same law of buoyancy. In this case, the helium balloon that you hold by a string is floating in a "pool" of air (when you stand underwater at the bottom of a swimming pool, you are standing in a "pool of water" maybe 10 feet deep -- when you stand in an open field you are standing at the bottom of a "pool of air" that is many miles deep). The helium balloon displaces an amount of air (just like the empty bottle displaces an amount of water). As long as the helium plus the balloon is lighter than the air it displaces, the balloon will float in the air.

It turns out that helium is a lot lighter than air. The difference is not as great as it is between water and air (a liter of water weighs about 1,000 grams, while a liter of air weighs about 1 gram), but it is significant. Helium weighs 0.1785 grams per liter. Nitrogen weighs 1.2506 grams per liter, and since nitrogen makes up about 80 percent of the air we breathe, 1.25 grams is a good approximation for the weight of a liter of air.

Therefore, if you were to fill a 1-liter soda bottle full of helium, the bottle would weigh about 1 gram less than the same bottle filled with air. That doesn't sound like much -- the bottle itself weighs more than a gram, so it won't float. However, in large volumes, the 1-gram-per-liter difference between air and helium can really add up. This explains why blimps and balloons are generally quite large -- they have to displace a lot of air to float. The following diagram shows the different lifting capacities of different volumes of helium:

A 100-foot-diameter balloon can lift 33,000 pounds! Here is how you can figure out the lifting capacity of the helium in a spherical helium balloon:

Although not used much anymore, hydrogen balloons were once quite popular. Hydrogen weighs just 0.08988 grams per liter. However, it is highly flammable, so the slightest spark can cause a huge explosion.

So why are helium and hydrogen so much lighter than air? It's because the hydrogen and helium atoms are lighter than a nitrogen atom. They have fewer electrons, protons and neutrons than nitrogen atoms do, and that makes them lighter (the approximate atomic weight of hydrogen is 1, helium is 4 and nitrogen is 14). Approximately the same number of atoms of each of these elements fills approximately the same amount of space. Therefore, the gases made of lighter atoms are lighter.

The amount of lifting power is controlled by how hot the air is. If you heat the air inside the balloon 100 degrees F hotter than the outside air temperature, then the air inside the balloon will be about 25 percent lighter than the air outside the balloon. So a cubic foot of air weighs about 35 grams at 32 degrees F. A cubic foot of hot air at 132 degrees F will weigh 25 percent less, or about 26.5 grams. The difference is 8.5 grams or so. So a hot air balloon has to be much bigger to support the same weight, but it will float because hotter air is lighter than cooler air.

You can get a sense for how much air contracts and expands as its temperature changes by performing the following experiment:

For more information on hot air ballooning, click here for a collection of links and check out How Hot Air Balloons Work!

Where Helium Comes From

If you put helium in a balloon and let go of the balloon, the balloon rises until it pops. When it pops, the helium that escapes has no reason to stop -- it just keeps going and leaks out into space.

Therefore, in the atmosphere there is very little helium at any given time. The helium that is there comes from alpha particles emitted by radioactive decay (see How Nuclear Radiation Works for details on alpha decay). In places that have a lot of uranium ore, natural gas tends to contain high concentrations of helium (up to 7 percent). This makes sense, since the decay of uranium emits lots of alpha particles and a natural gas pocket tends to be a sealed container underground. Helium is cryogenically distilled out of natural gas to produce the helium we put in balloons.

For more on helium and related topics, check out the links on the next page!