by Molly Edmonds
Prev NEXT
3 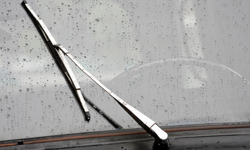 When Anderson first proposed the windshield wipers, some people thought it would be too distracting to drivers.
iStockphoto/Thinkstock

At the dawn of the 20th century, Mary Anderson went to New York City for the first time. She saw a much different New York City than the one tourists see today. There were no cabs honking, nor were there thousands of cars vying for position in afternoon traffic. Cars had not yet captured the American imagination and were quite rare when Anderson took that trip, but the woman from Alabama would end up inventing something that has become standard on every automobile. During her trip, Anderson took a tram through the snow-covered city.

She noticed that the driver had to stop the tram every few minutes to wipe the snow off his front window. At the time, all drivers had to do so; rain and snow were thought to be things drivers had to deal with, even though they resulted in poor visibility. When she returned home, Anderson developed a squeegee on a spindle that was attached to a handle on the inside of the vehicle. When the driver needed to clear the glass, he simply pulled on the handle and the squeegee wiped the precipitation from the windshield. Anderson received the patent for her device in 1903; just 10 years later, thousands of Americans owned a car with her invention.