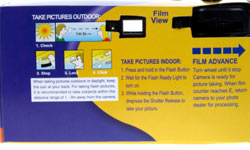 The back of a disposable camera with instructions for taking photographs using the throwaway technology.
Hemera/Thinkstock

Like contact lenses, cameras became a disposable commodity in the 1980s. Fujifilm invented the modern disposable camera in 1986 with the Utsurun-Desu, and other major photography companies like Kodak, Canon and Nikon quickly started manufacturing similar products. Buying a camera was no longer a hefty investment: Disposable cameras were cheap and extremely easy to use, perfect for shooting a specific occasion with one roll of film. A built-in flash eventually became the norm for disposable cameras, and some even used a pair of lenses to create a manual zoom.

Disposable cameras didn't take over the photography market, but they absolutely cornered the tourism industry. Cheap throwaway cameras were perfect for traveling, easy to use and similarly easy to outfit with plastic cases for underwater shooting.

The rise of digital photography spelled an end to the glory days of disposable cameras. With images saved to memory, rather than permanently captured on film, digital cameras introduced infinite re-usability into the camera world. Still, disposable cameras have their place -- they're great party favors, easy for kids to use, and won't set you back hundreds of dollars after an accidental dip in the ocean.