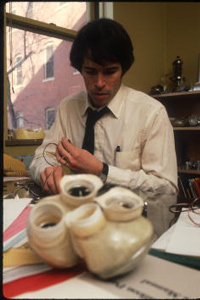 Research into artificial hearts dates back to the 1950s. The first surgical implantation of an artificial heart in a human being took place in 1969. But early artificial hearts were a temporary measure. The goal was to use the equipment to keep the patient alive until a surgeon could perform a true heart transplant.

The Jarvik-7 artificial heart was different. Engineers designed it to be a permanent heart transplant instead of a stopgap measure. The first implantation of a Jarvik-7 heart took place in 1982. The lead surgeon was William DeVries and the name of the cardiac patient was Barney Clark. The heart ran on compressed air. Tubes from a compressor entered Clark's body through incisions in his abdomen. Clark survived 112 days after the surgery before passing away.

Living with a Jarvik-7 heart would require some serious adjustments. The home system for the heart had a console about half the size of a refrigerator. There was also a portable system that had a power unit about the size of a briefcase. Even now, several medical institutions rely on artificial hearts that are nearly identical to the Jarvik-7 model from 1982 to keep patients alive while waiting for a real human heart.

That ends our trip back to the 1980s. It's time to strip off the leg warmers, put away the shoulder pads and resume wondering where all the music on MTV went. Learn more about these inventions by following the links below.