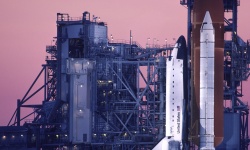 After the lunar missions in the late '60s and early '70s, the people at NASA dedicated themselves to developing a new type of vehicle that could venture into space and return home safely. The culmination of their research and development was the Space Shuttle. The engineers and mechanics designed it to be more than just a transportation vehicle -- the Space Shuttle would become an orbiting scientific laboratory capable of hosting numerous experiments designed to increase our understanding of the universe. The Space Shuttles also played an important role in deploying and maintaining equipment in space, including satellites and the International Space Station.

The first Space Shuttle launch was the Columbia on April 12, 1981. The mission lasted a little more than two days. The Columbia returned home safely and gave NASA valuable information about the design of the shuttle. A few tiles had broken off during the launch sequence, which informed NASA that engineers would need to make adjustments to head off future problems with other launches.

Since Columbia's launch, there've been more than 130 Space Shuttle missions, and the program has inspired hundreds of children to study science and dream of space exploration.