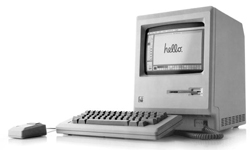 A computing revolution began in the 1970s. Early computers were massive machines -- some so large that they'd take up an entire floor of a building. Yet these machines had less processing power than a typical smartphone might boast today. As the era of miniaturization approached, computers shrunk. And hobbyists began to explore a world previously reserved for academic, government and research institutions. The personal computer became reality.

IBM's 5150 Personal Computer launched in 1981. It contained an Intel 8088 processor and ran on version 1.0 of the PC-DOS operating system. The computer supported the Microsoft BASIC programming language. For much of the 1980s, IBM was synonymous with personal computers. You might say you own an IBM the same way you'd talk about owning a Windows PC nowadays. In fact, the old IBM PC is an ancestor to the Windows-based computers used by millions of people today.

In 1984, Apple launched the Macintosh computer. It was the first personal computer to feature a graphics-based user interface. Other computers required users to type in commands to launch applications. The Macintosh used icons to represent programs and a strange device called a mouse. Though neither the mouse nor the graphic user interface were new ideas, they hadn't been part of the mass consumer market until the Macintosh hit store shelves.