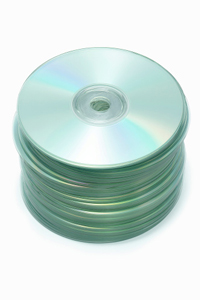 Compact discs revolutionized both the music industry and the way we store digital data.
© iStockphoto/Thinkstock

Music collectors in the early 1980s had limited choices. Audiophiles claimed that the only sound worth hearing was stored on vinyl albums. But these records take up a lot of space and can be damaged easily. Cassettes and 8-track tapes took up less space, but the magnetic storage format degraded over time. Companies like Sony and Philips swooped in to create an alternative: the compact disc.

In the early to mid 1980s, engineers wrote a series of books that set out the standards for the compact-disc format. There were five books in the series, each a different color. The first book, which was red, established the basic standards for audio recording on compact disc. Later books expanded the standards, adding data storage capabilities to the CD and giving birth to the CD-ROM and CD-RW formats.

Not only did this revolutionize the music industry, practically killing off the cassette and vinyl markets, but also the budding computer industry. Early floppy disks had limited storage capacity and could lose data if exposed to magnets. Compact discs stored information in an optical format and could hold far more data than typical magnetic disks. The first compact disc players were expensive, but by the 1990s the format dominated both the music and computer storage markets.