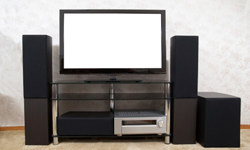 You might think that HDTVs are recent inventions but the first ones were demonstrated in the 1980s.
©iStockphoto/Thinkstock

The first high-definitiontelevision broadcasts in the United States happened in the late 1990s. But the invention of the HDTV dates back much earlier. The Japan Broadcasting Corporation, also known as NHK, began work on a new standard for television that included a wider screen and more lines of resolution back in the late 1970s. By 1980, the first prototype sets were amazing viewers with pictures clearer than any set had shown before.

The company was eager to push this new standard to other parts of the world, ensuring Japanese companies an advantage in the television market. It wasn't until 1987 that NHK got the opportunity to show the FCC, and even politicians in Washington, D.C., what HDTV could do. The reaction ranged from amazement to anxiety. The implications of HDTV went far beyond viewer enjoyment -- it could affect everything from the television manufacturing market to the semiconductor industry.

The United States took a slow, cautious approach. It wasn't until the late 1990s that HDTV sets became available on store shelves. But the TVs that surprised American consumers at the close of the 20th century could have been in homes a decade earlier.