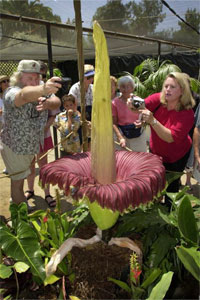 Shouldn't those people be holding their noses? This rare blooming corpse flower is one of about a dozen or to have bloomed in the United States in the past century. See more corpse flower pictures.
David McNew/Newsmakers/Getty Images

Put yourself in the shoes of Italian botanist Odoardo Beccari, trekking through the rainforest of Sumatra in 1878. The guy has spent days exploring the Indonesian island, surrounded by the rich, sweet aromas of the forest. As he heads toward the forest's edge, he catches the faintest hint of rotten meat. Must be a dead monkey nearby.

Suddenly the wind shifts, and a stench floods his nostrils. The smell, a combination of spoiled eggs, dirty laundry and day-old roadkill, washes over him. Curious, the botanist looks back toward the source of the odor and spies a massive plant about 20 feet (6 meters) away. As he gets closer, he sees that a huge pillar taller than a man is rising from the plant's leafy, red, vaselike structure. Moreover, the smell seems to be coming from the striking, unique plant. That's just one potential scenario for how Beccari discovered the extremely rare and wonderful Titan Arum.

Although the Titan Arum looks like a flower, it's technically an inflorescence, a group of flowers clustered around a central column known as a spadix and surrounded by a leafy structure called a spathe. Titan Arum, the world's largest inflorescence, goes by several names. Its Indonesian name is bunga bangkai, which translates into "corpse flower." The plant's scientific name is Amorphophallus titanum, though this name comes from the plant's rather, uh, distinctive shape instead of its smell (dust off your old Latin textbook to see what we mean). As Shakespeare might have put it, however, that which we call a corpse flower, by any other name, would smell as revolting.

Why does the corpse flower smell so terrible? To attract insects of course. Titan Arum is such a large plant that it can take a year or more for the plant to store enough energy to bloom (and even then, the plant can only sustain its bloom for a couple of days). Because Titan Arum plants are located so far apart from one another and bloom so infrequently, they need to attract as much insect attention as possible to ensure pollination. The corpse flower uses its smell to attract sweat bees and beetles looking for a prime location to lay their eggs. By crawling all over the plant, these insects play a vital role in pollinating the Titan Arum.

The plant's distinctive smell is just one of its tricks for attracting insects. Read on to find out some of its others.

What Is Ashwagandha?
Epically Tough Baobab Trees Dying Off in Africa
The Science Behind Your Cat's Catnip Craze