Fitting Inside a Cell 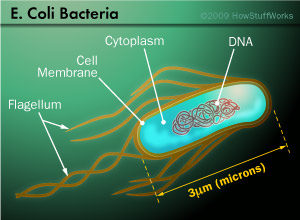 A typical E. coli bacterium is 3 microns long, but its DNA is more than 300 times longer. So, the DNA is tightly coiled and twisted to fit inside.
2009 HowStuffWorks

DNA is a long molecule. For example, a typical bacterium, like E. coli, has one DNA molecule with about 3,000 genes (A gene is a specific sequence of DNA nucleotides that codes for a protein. We'll talk about this later). If drawn out, this DNA molecule would be about 1 millimeter long. However, a typical E. coli is only 3 microns long (3 one-thousandths of a millimeter).So to fit inside the cell, the DNA is highly coiled and twisted into one circular chromosome.

In the next section we'll look at how the DNA replication process works.