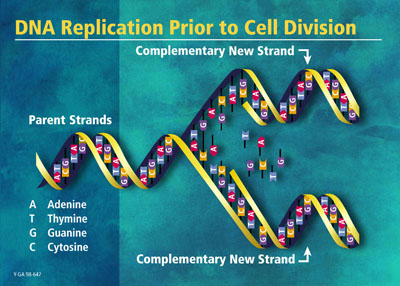 The double helix of DNA unwinds and each side serves as a pattern to make a new molecule.
Image courtesy U.S. Department of Energy Human Genome Program

­DNA carries the information for making all of the cell's proteins. These pro­teins implement all of the functions of a living organism and determine the organism'­s characteristics. When the cell reproduces, it has to pass all of this information on to the daughter cells.

The structure of DNA lends itself easily to DNA replication. Each side of the double helix runs in opposite (anti-parallel) directions. The beauty of this structure is that it can unzip down the middle and each side can serve as a pattern or template for the other side (called semi-conservative replication). However, DNA does not unzip entirely. It unzips in a small area called a replication fork, which then moves down the entire length of the molecule.

Let's look at the details:

Different types of cells replicated their DNA at different rates. Some cells constantly divide, like those in your hair and fingernails and bone marrow cells. Other cells go through several rounds of cell division and stop (including specialized cells, like those in your brain, muscle and heart). Finally, some cells stop dividing, but can be induced to divide to repair injury (such as skin cells and liver cells). In cells that do not constantly divide, the cues for DNA replication/cell division come in the form of chemicals. These chemicals can come from other parts of the body (hormones) or from the environment.

The DNA of all living organisms has the same structure and code, although some viruses use RNA as the information carrier instead of DNA. Most animals have two copies of each chromosome. In contrast, plants may have more than two copies of several chromosomes, which usually arise from errors in the distribution of the chromosomes during cell reproduction. In animals, this type of error usually causes genetic diseases that are usually fatal. For some unknown reasons, this type of error is not as devastating to plants.