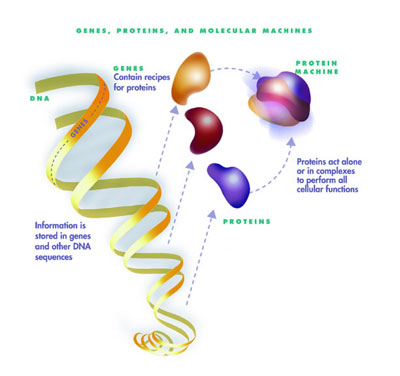 DNA contains the information to make proteins, which carry out all the functions and characteristics of living organisms.
Photo courtesy U.S. Department of Energy Genomics: GTL Program

­DNA carr­ies all of the information for your physical characteristics, which are essentially determined by proteins. So, DNA contains the instructions for making a protein. In DNA, each protein is encoded by a gene (a specific sequence of DNA nucleotides that specify how a single protein is to be made). Specifically, the order of nucleotides within a gene specifies the order and types of amino acids that must be put together to make a protein.

A protein is made of a long chain of chemicals called amino acids Proteins have many functions:

The particular sequence of amino acids in the chain is what makes one protein different from another. This sequence is encoded in the DNA where one gene encodes for one protein.

The genetic code consists of 3-base "words" or codons that specify particular amino acids. The order of the codons designates the order of the amino acids in the protein.
Photo courtesy U.S. Department of Energy Human Genome Program

How does DNA encode the information for a protein? There are only four DNA bases, but there are 20 amino acids that can be used for proteins. So, groups of three nucleotides form a word (codon) that specifies which of the 20 amino acids goes into the protein (a 3-base codon yields 64 possible patterns (4*4*4), which is more than enough to specify 20 amino acids. Because there are 64 possible codons and only 20 amino acids, there is some repetition in the genetic code. Also, the order of codons in the gene specifies the order of amino acids in the protein. It may require anywhere from 100 to 1,000 codons (300 to 2,000 nucleotides) to specify a given protein. Each gene also has codons to designate the beginning (start codon) and end (stop codon) of the gene.

In the next few sections, we'll see how proteins are built.